Infrastructure Development in the India-China Border: Factoring the Western Support 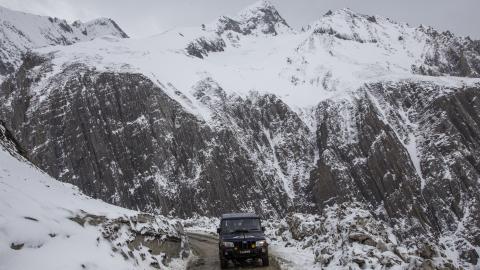 The author recently travelled to the Indian side of the India-China bordering region. This piece is based on the author’s field visit.

The historical background has played into the Western response. In 1945, Soviet troops committed many war crimes against the Japanese and South Koreans in their occupied areas. These historical sentiments toward Russia affected the decision of Japan, Taiwan, South Korea, and Singapore to stand with Ukraine in the current conflict. However, even if supporting Ukraine against Russia’s aggression is a priority just now, the Western countries should not forget that China is the longer-term threat and strengthen their defenses against it.

The most recent US National Security Strategy mentioned, “The PRC is the only competitor with both the intent to reshape the international order and, increasingly, the economic, diplomatic, military, and technological power to do it.” Even if Russia is a priority right now, preventing China’s rise is a more urgent long-term priority. In addition, there is a possibility that Russia’s aggression toward Ukraine could make China more powerful. Because of its aggression, Russia is under strict sanctions from Western countries. It is therefore relying heavily on China as its main customer of energy resources. Because Russia needs China’s economic support, China might be in a more favorable position to get sophisticated military technologies from Russia. In addition, after the war ends, China might initiate reconstruction projects in Ukraine in order to expand its influence both in Russia and Ukraine, as it has done in other countries through its Belt and Road Initiative. Therefore, if China plays its cards right in the current crisis, there is a chance for it to come out ahead and expand its influence. The Western countries should continue their efforts to prevent China’s ambition in the Indo-Pacific, even if Russia is taking center stage right now.

To deal with China, what exactly should the Western countries do? China’s pattern of territorial expansion indicates that maintaining a military balance is key. In the 1950s, just after France withdrew from the Indochina peninsula, China occupied half of the Paracel Islands. In the 1970s, after the US withdrew from Vietnam, China went on to occupy the other half of the Paracel Islands. In the 1980s, after Soviet troops reduced their numbers in Vietnam, China expanded its activities in the Spratly Islands and occupied six features. And in the 1990s, after US troops withdrew from the Philippines, China occupied the Mischief Reef. As this pattern in the South China Sea shows, China has expanded its territories any time the military balance changed. To deal with China, maintaining military balance is key.

However, the India-China border is a flashpoint with China’s aggression toward India escalating. In 2011, the number of China’s incursions into India was 213. The number increased to 426 in 2012, 411 in 2013, 460 in 2014, 428 in 2015, 296 in 2016, 473 in 2017, and 404 in 2018. And in 2019, the number jumped to 663. Since 2020, the situation has escalated even more. In June 2020, 5,000 Chinese troops entered the Indian side and clashed with Indian troops. At least 20 Indian soldiers died and 76 were injured (real fatalities on the Chinese side are unknown). Since then, China has deployed the latest weapons such as DF-17 hypersonic missiles, DF-21 and 26 ballistic missiles, J-20 stealth fighter jets, etc. China is building 628 villages in the India-China border area. If Chinese people move there, China can expand its territorial claim. Because of this, Ministry of External Affairs Spokesperson Arindam Bagchi said recently that the situation in the border area has still not stabilized. Indeed, the situation has deteriorated every year.

In August 2022, I got a chance to visit Ladakh in India, which is a frontline part of the India-China border rivalry. I went from the capital city, Leh, to Pangong Tso, which is the lake Chinese troops entered on the Indian side. I could see many military camps and realized that India has deployed many land troops in this region. But troops cannot perform well without enough infrastructure-based logistical support. And I recognized that logistical support alone was not enough. Between Leh and the Pangong Tso, one-third of the road was not covered by concrete. When China agreed to withdraw from a part of the Pangong Tso area in February 2021, it withdrew 200 main battle tanks within two days. This is typical of the situation in the India-China border area. The infrastructure on the Chinese side is well prepared and maintained, but the infrastructure on the Indian side is not.

Western countries, including the US, European mainstream countries, and Asian economies like Japan, should support India’s efforts to improve infrastructure for Indian troops. Providing heavy machines to construct roads is the priority now.