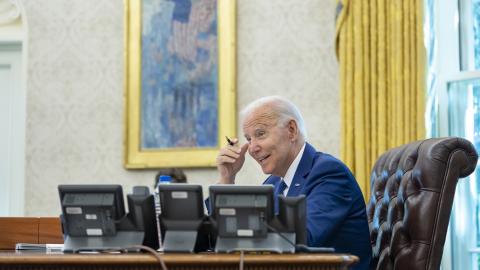 Last week the Biden administration finally released its long-awaited National Security Strategy. It took the White House 21 months — nearly half of President Joe Biden’s first term in office — to publish the document. In this dangerous world, it beggars belief that the administration was able to publish a “National Gender Strategy” in half the time.

The security strategy runs to 47 pages but only four of them are devoted to Russia or China. Only one page is devoted to the role of the US military in dealing with these threats. Much of the document is dedicated the political causes of the American left, such as climate change and “social justice” issues.

Even less attention is given to the Middle East. Out of the 23,000 words in the document only 870 are devoted to the region — less than 4 percent of the total.

To be fair, this lack of focus on the Middle East in the strategy follows a similar situation over the summer with NATO. There was barely any attention of the Middle East in the alliance’s new Strategic Concept, which was published in June. In fact, in a document that is just over 4,200 words long, only one paragraph of about 80 words was devoted to the region.

Furthermore, NATO’s two main platforms on which it engages with the Middle East and North Africa region, the Mediterranean Dialogue and the Istanbul Cooperation Initiative, were not mentioned at all.

It is almost as if there is a collective case of geopolitical denial of the importance of the Middle East when it comes to the stability and security of the trans-Atlantic community.

The title of the Middle East section in the US National Security Strategy is “Support De-escalation and Integration in the Middle East.” It talks about “building partnerships, coalitions and alliances” in the region, deepening “Israel’s growing ties to its neighbors” and “fostering greater economic integration.” However, there have been no policies pursued, and there are no forthcoming initiatives, that address any of these issues in any meaningful sense.

One of the best ways to promote peace and prosperity in the region is to find ways to expand diplomatic relations between Israel and its Arab neighbors. Not only will this help bring new economic opportunities to the region but it will also help unify the Middle East against the ever looming Iranian threat.

Here, the White House has come up short. The 2020 Abraham Accords, which normalized relations between Israel and some of its Arab neighbors, was perhaps the greatest achievement of the Trump administration. Biden’s National Security Strategy barely gives them lip service and there has been no meaningful effort to expand the accords by the president’s team. In fact, it took several months in the White House before Biden administration officials would even acknowledge the success of the Abraham Accords.

When Biden finally visited the Middle East last summer, after waiting 18 months before doing so, there was no genuine push to promote the accords.

Regarding the strategy’s call to “foster greater economic integration” in the Middle East, the Biden administration has done nothing. The president has not promoted any semblance of a free-trade agenda, whether for the Middle East or any other region of the world. In fact, Biden has decided to keep the pointless steel and aluminum tariffs on Gulf countries that were put in place by the Trump administration.

Over the years, countries such as Bahrain, Oman and Qatar have done much to diversify their economies and the steel and aluminum sectors have played a key role. Not only are these tariffs bad for the American consumer, they also needlessly complicate America’s bilateral relationships in the region.

To truly “foster greater economic integration” in the Middle East, the US must pursue a pragmatic, region-wide trade agenda that will remove barriers to flows of goods and services.

Over the past few decades, the US has established a network of trade pacts in the region through bilateral free-trade agreements with Israel, Bahrain, Oman and Jordan. In addition to making strategic efforts to better utilize these existing deals, Washington should consider pursuing additional trade agreements that can not only lower the costs of imported goods for consumers in the region, but also expand exports to the US market.

Considering the National Security Strategy was published so far into the president’s term, it is unlikely to serve as a practical road map for US foreign policy. It is simply too late for that.

The Biden administration has shown an unwillingness to pursue a proactive foreign policy. This was evident in the debacle in Afghanistan last year and the dithering over providing Ukraine with all the weapons it needs.

The main focus of the Biden administration is on pushing an increasingly controversial domestic agenda at home. Foreign policy is considered a distraction. The National Security Strategy is yet another example of this.