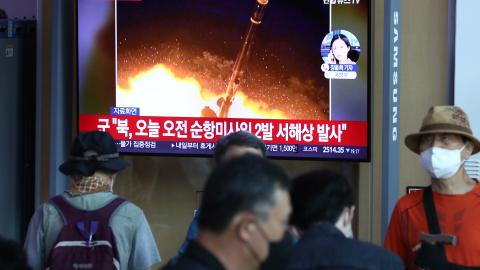 Following the launch of a long-range North Korean missile that flew over Japanese territory, concerns are rising that Pyongyang will soon carry out its seventh nuclear test. Such a provocation would come as part of a cumulative six-month North Korean military campaign that has included dozens of missile tests and increasingly hostile rhetoric aimed at the United States and its allies in the Western Pacific.

Despite that the Democratic People’s Republic of Korea (DPRK) has long been a nuclear weapons power, there are five reasons that the U.S. government and its Japanese and Korean allies are taking this development seriously.

First, North Korea utilizes its nuclear arms as a shield behind which it can undertake rogue state actions including terrorism. Advances in North Korea’s nuclear capabilities will only heighten Kim Jong-un’s confidence that he can act with impunity.

Second, the nuclear weapons and missile tests serve as a technological resource and source of cash which Pyongyang can provide to other nuclear weapons states (e.g., Iran and Pakistan) that are seeking to improve their own nuclear and ballistic missile technologies.

Third, North Korea secures much of its hard currency cash from overseas criminal enterprises, especially drug sales and counterfeiting operations. These funds then transit China on their way back to the North Koreas nomenklatura. The DPRK’s nuclear threats serve to disincentivize anyone from interfering.

Fourth, Pyongyang sells arms to Russia and Iran, and in return may be securing from Moscow high technology nuclear capabilities such as how to conduct an atmospheric electromagnetic pulse (EMP) type of attack or build a highly accurate missile. For its part, Iran provides both oil and hard currency to support the DPRK regime.

It is an open question to ask what specific threat the DPRK poses to the United States. What would Kim actually do with his nuclear weapons? A Hudson seminar I attended on October 5, 2022, sought to answer these questions.

Rather than planning an imminent attack, it is more likely that the DPRK is looking to develop more sophisticated nuclear and military capabilities in order to strike targets like Guam that are thousands of kilometers away.

Also on the table could be an EMP attack which could immobilize the United States, Japan, or South Korea.

A North Korean nuclear test might also involve a relatively small nuclear device, giving further evidence that the DPRK has weapons suitable for a sea-launched ballistic missile—increasing the regime’s survivability and deterrence via a second-strike capability.

A key question remains: why does China not work to end the nuclear program in North Korea? In his 2010 book, The Nuclear Express, Thomas Reed, former secretary of the U.S. Air Force and deputy national security adviser, explains how China explicitly helped the Kim regime develop nuclear weapons technology and spread it in part through A.Q. Khan’s Pakistani-based nuclear network. This flowed from a decision by Chinese general secretary and head of the Communist Party Deng Xiaoping in 1982 to be a nuclear weapons technology supplier to rogue states such as Pakistan, North Korea, Iran, Iraq, and Libya.

Contrary to its obligations under the Nuclear Non-Proliferation Treaty of 1969, China spread nuclear weapons technology to its allies to cause trouble for the United States and the West. It is not a coincidence that each of these states has been a frequent global flashpoint over the past four decades.

Years later, North Korea is now a nuclear weapons state with an arsenal of many dozens of bombs.

Recent polls show that at least 70 percent of the South Korean people want the country to build its own nuclear weapons. Japan too has begun some discussions, most notably by a former prime minister, Shinzo Abe, who recently was assassinated.

The United States, on the other hand, is dead set against its allies in Korea and Japan going nuclear but is also working overtime to modernize its own extended nuclear deterrent for both countries. However, it is somewhat handicapped by previous delays and lack of attention.

The issue is whether America’s allies fully trust the United States to actually risk the destruction of an American city to save a Korean or Japanese city, an issue that surfaces when the U.S. extended deterrent is discussed. In Korea and Japan, more discussions are being held on adding robust missile defenses to the mix of deterrent forces, especially the Terminal High Altitude Aerial Defense (THAAD) system for Korea.

China is really the center of East Asia’s nuclear puzzle. Beijing thinks it can wear the United States down and jettison U.S. forces from the Western Pacific starting with the Korean Peninsula—an outcome that has been pushed by American isolationists.

But without the U.S. presence, the Western Pacific and Indian subcontinent will become a Chinese-controlled lake, with 5 billion people and $60 trillion in GDP falling under Chinese hegemonic control. This is not in the U.S. national interest.