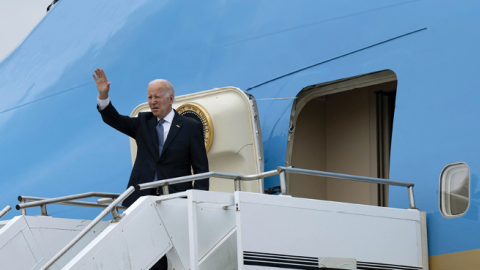 Caption
President Joe Biden waves before boarding Air Force One on June 28, 2022, in Munich, Germany, after attending the G7 Summit hosted by the German chancellor. (Photo by Brendan Smialowski / AFP via Getty Images)

America’s strategic pivot from the Middle East was a mistake, President Biden acknowledged on his recent swing through the region. Admitting that is a good thing; you can’t begin to fix a problem before acknowledging that you have one. Unfortunately, this “mistake” was only one part of the profound failure of American strategic culture that has taken this country and the world into an increasingly dark place. The question now is whether Mr. Biden and his team understand how much more needs to be done to get American foreign policy back on track.

At the beginning of the 21st century, the world seemed more peaceful and American power more solidly entrenched than ever before. Twenty-two years into the new century, Americans face the most threatening international environment since the darkest days of the Cold War. The war in Ukraine threatens the post-Cold War order in Europe. Iran is well on its way to a nuclear bomb, and China’s shadow looms larger than ever over Taiwan.

The record of American statecraft since 2000 has been, to put it mildly, unsatisfactory. The wars in Iraq and Afghanistan involved immense human and economic costs even as Iranian power surged across the Middle East. America’s failure to enforce trade rules against China facilitated the rise of a hostile communist rival while undermining political support for free trade in both political parties. What posterity will likely regard as the Chamberlainesque responses of American presidents in both parties to Russia’s growing assertiveness allowed Vladimir Putin to rebuild the Kremlin’s power.