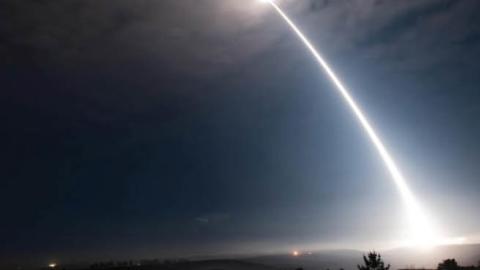 A flurry of opinion pieces have called into question the Air Force’s decision to award the contract to begin building the country’s new intercontinental ballistic missiles (ICBMs). For example, in an article by William D. Hartung, he asks, "What’s the rush?” My answer to that is: half a century is hardly a rush.

That is how old the current Minuteman IIIs are, and senior officials across Republican and Democratic administrations have said for years that we could no longer extend the life of those old systems without unacceptable risk. Following ten years of study, rigorous analyses, and development, the U.S. will replace the Minuteman III with the Ground-based Strategic Deterrent (GBSD).

One of the most persistent criticisms of GBSD is less about the system and more about ICBMs, generally. Indeed, Mr. Hartung is transparent about his ultimate objective, which is "eliminating land-based nuclear missiles altogether." Critics claim ICBMs put the country at risk of barreling us into a nuclear holocaust because they are on “hair trigger alert.” Mr. Hartung lauds Former Defense Secretary William J. Perry’s warning: “The highest probability of starting a nuclear war is a mistaken launch caused by a false alarm and a rushed decision to launch nuclear-armed ICBMs…”

If we are going to look to Secretary Perry for counsel on this matter, it merits considering his 2009 report, which he co-authored with former Defense Secretary James R. Schlesinger. Regarding hair trigger alert," the two former Secretaries of Defense "penned: "This is simply an erroneous characterization of the issue. The alert postures of both countries are, in fact, highly stable. They are subject to multiple layers of control, ensuring clear civilian and indeed presidential decision-making." Secretaries Perry and Schlesinger also stated in this study that “The [ICBM] force is also immediately responsive in a highly controlled manner.”

The beauty in our ICBMs' alert status is that they offer the United States a powerful prompt response option that can hit any target on the other side of the planet. But one should not conclude that an on-alert status means that we are a hair's breadth away from launching ICBMs at an unsuspecting country accidentally or due to the wrong belief that we are under nuclear attack.

The United States fields an extensive array of sensors to provide warning of a massive launch of ICBMs against our missile fields. We have satellites to detect the infra-red plumes, an array of radars to detect inbound missiles, other satellites to detect the movement of mobile ICBMs and other forces, and other intelligence assets. And, realistically, should an enemy decide to launch a nuclear attack against the United States, barring an act of insanity, it would occur within a broader context of tensions. So this hypothetical nightmare scenario, where we would have a believable warning of enemy launch that is, in fact, a false alarm, is highly unlikely.

Strategic Commanders have repeatedly pushed back on the notion of “hair trigger alert” over the years, but Admiral Richard W. Mies said it so well before a Senate committee in 2001 it is worth repeating here at length:

I would also like to challenge the perception that our forces are on "hair-trigger" alert – a characterization routinely used to justify de-alerting proposals. Multiple, stringent procedural and technical safeguards have been in place and will remain in place to guard against accidental or inadvertent launch. Rigorous safeguards exist to ensure the highest levels of nuclear weapon safety, security, reliability, and command and control. Additionally, the policy of the United States is not to rely on "launch on warning." As I stated earlier, our forces are postured such that while we have the capability to respond promptly to any attack, we will never need to rely upon "launch on warning." The diversity, flexibility, and survivability of our strategic forces and our command and control networks are designed to ensure we are never faced with a "use them or lose them" dilemma, and we are always capable of an assured response.

It is no wonder the Obama administration affirmed the triad's salience and eschewed calls to shelve any leg after rigorous analysis. ICBMs continue to provide an indispensable role in bolstering the effectiveness of that deterrent, especially now, when the United States faces adversaries with the ability to pose a strategic threat to the United States and our way of life.

The country’s 400 Minuteman IIIs are housed in silos and dispersed in Montana, Nebraska, and North Dakota. An enemy would need to launch a large-scale attack against the American homeland to diminish this leg of the triad. To quote Secretaries Perry and Schlesinger again: “The ICBM force imposes on a prospective aggressor the need to contemplate attacking only with a very large number of nuclear weapons, substantially depleting its forces while ensuring a devastating response by the United States.” Put another way, our ICBMs significantly raise the bar for any enemy who is even contemplating a strategic attack against the U.S. homeland.

The United States should be looking for ways to further complicate an adversary's calculations, not simplifying them. Without U.S. ICBMs, adversaries could focus their targeting only on the sea and air legs of the triad. Our bombers and submarines operate from a handful of bases. This creates a more than plausible nightmare scenario wherein fewer bases tempt adversaries to contemplate executing a first strike that would have a devastating impact on the survival of the United States.

The challenge for policymakers and strategists is to ensure the triad is credible to deter our adversaries from concluding that a strategic attack is ever worth the cost. A credible nuclear force is one that is reliable, safe, and leverages modern technology to meet the challenges of today and for decades to come. The decision to replace the Minuteman III program with the GBSD program is a welcome move toward this end.