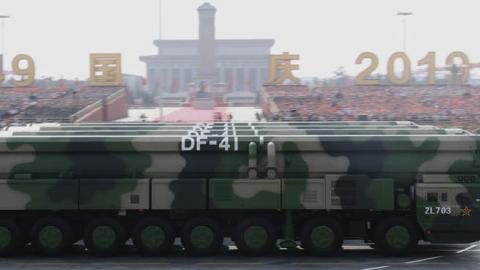 Caption
Dongfeng-41 nuclear missiles take part in a military parade celebrating the 70th anniversary of the founding of the People's Republic of China in Beijing, China, on Oct. 1, 2019. (Getty Images)

Nuclear arms control has been a fact of U.S. strategic deterrent efforts since at least 1972 when the Nixon administration and Congress ratified the Anti-Ballistic Missile (ABM) Treaty and the SALT I or Strategic Arms Limitation Talks agreement with the USSR. While the Johnson administration had started arms negotiation with the Soviet Union, the Glassboro Summit Conference did not produce an agreement.

The new impetus for the agreement came from the Soviet side, which in turn had been spurred by the Johnson administration’s push in 1967 for a limited or “thin” missile defense shield aimed at deflecting China’s new nuclear forces.

Nixon responded positively to Brezhnev’s outreach but offered a twist. He proposed the two countries negotiate an agreement on offensive nuclear forces as well, which the Soviets eventually accepted as they had been trailing the US in the scope of their nuclear forces.

The resulting ban on continental U.S. missile defenses (except for an allowed nominal deployment of 100 interceptors) and the SALT I Treaty started more than fifty years of arms control that has become an inextricable part of U.S. strategic deterrence.

While SALT was described as arms control, the treaty did allow a huge increase in deployed, in the field strategic (long-range) nuclear weapons, from roughly the 2,000 deployed at the time to around 10,000-12,000. What was limited were the total number of what were termed SNDVs, or strategic nuclear delivery vehicles, which included ballistic missiles at sea, on land, and on strategic nuclear bombers. At the time, the United States was just beginning to add multiple warheads to its arsenal of Minuteman intercontinental ballistic missiles (ICBM) and Poseidon sea-launched missiles, which at the time both had only a single warhead each.

While the Poseidon had roughly the same range of the Polaris, it could carry upwards of fourteen warheads on each of the sixteen missiles on thirty-one submarines, with double the accuracy, giving the U.S. a hypothetical nuclear deterrent force of nearly 7,000 warheads, with somewhere around at least one-third on patrol at any time.

At the same time, 500 Minuteman III missiles were deployed between 1970 and 1975, with three rather than one warhead each, with improved accuracy and range. 450 Minuteman II missiles would remain in the force, having been first deployed in 1966. They were later taken off alert and removed from their silos in 1991 by then-President George H.W. Bush with the fall of the Berlin Wall and the collapse of the Warsaw Pact.

Throughout the 1970s, U.S. total deployed warheads did markedly increase, but efforts to modernize the U.S. nuclear arsenal, including the MX missile, the Ohio-class submarine, the C-4 sea-launched ballistic missile, and the new B-1 and B-2 bombers and air-launched cruise missile, suffered from major funding delays and lack of support. The post-Vietnam era along with détente and peaceful coexistence narratives of U.S. foreign policy markedly reduced support for U.S. military spending, including nuclear modernization.

Like Sputnik in 1957, the 1979 Soviet invasion of Afghanistan stopped the downward spiral in U.S. defense spending. President Jimmy Carter proposed a defense increase of 6 percent in 1980 but it would not be until November 1981 that the United States announced a comprehensive nuclear modernization and arms control proposal designed to counter the worsening correlation of forces which the Soviets believed favored Moscow.

For example, the SALT II Treaty of 1979, pulled from Senate consideration by the Carter administration when the Soviets invaded Afghanistan, allowed for a continued buildup in Soviet forces, even as SALT II supporters urged the United States to abide by its terms.

During much of the 1980s, Ronald Reagan warned about the growing imbalance between the United States and the Soviet Union when he spoke about Moscow’s growing military power, a key concern of the 1976 recreated Committee on the Present Danger.

But Reagan was not just pushing for more offense. He also supported two elements of a deterrent strategy that were new. He first supported missile defenses and saw defenses not as a substitute for deterrence—a criticism his opponents got wrong—but as a bulwark adding to deterrence, as well as major reductions in nuclear weapons, as opposed to the joint agreed to build up characterized by the SALT process.

In addition, Reagan was very cognizant by the 1980 presidential campaign that the Soviets were not abiding by their treaty commitments. Thus, Reagan would eventually adopt the phrase, “Trust but verify.”

By the late 1980s, the Soviets were deploying over 10,000 long-range or strategic nuclear weapons. While the Soviets relied on multiple-warhead land-based missiles that were on nearly full alert, the United States relied primarily on sea-based systems, where roughly one-third were always in port, while another one-third were in transit and the final third on patrol.

So, while the SALT process allowed each nation to have an equal number of deployed countable warheads, on a day-to-day basis the Soviets had more fast flying missiles “ready to go” than the United States. This “window of vulnerability” was characterized by critics of détente and peaceful coexistence as a danger to U.S. security that could not be altered if not taken seriously.

There was also the added danger of the huge Soviet throw-weight advantage or ability to add thousands more missile warheads to its SALT accountable force that contributed to the strategic imbalance.

But with a new peace through strength strategy, three new arms deals were completed in 1987, 1991, and 1993, with Presidents Reagan and Bush markedly reducing Soviet and then Russian deployed nuclear forces. Gone was the entirety of the Soviet-era SS-20 INF range missiles. Under START I and II, deployed Russian and U.S. strategic warheads were projected to drop nearly 90 percent.

With the Moscow Treaty signed in 2002 and the New START Treaty ratified in 2010 and extended in 2021, it is often assumed the reduction to a nominal 1,550 deployed, accountable long-range nuclear warheads can simply be extended even lower towards the global zero level supported by the disarmament community and its political supporters.

Well, not so fast.

In addition, even though the START SNDV force the Russians maintain is assumed to be no more than slightly above 500 missiles and bombers, a great number of long-range or strategic Russian nuclear forces may not be contained within the New START framework, to say nothing of the Russian stockpile of 2,000-4,000 tactical nuclear weapons that are not counted under any arms control agreement.

Added to this imbalance is that Russia can upload many of its land-based missiles, to where additional thousands of warheads could be added to its strategic arsenal if Moscow breaks out from the current treaty limits.

But the dangers do not stop there. While the New START Treaty nominally limits Russian warheads to 1,550, with the allowed Russian bombers counting only as sixty warheads, (the same counting rules that also apply to the United States), China’s growing nuclear arsenal is not contained in any manner—by New START or any other agreement.

Although one could argue that China, as an exclusive member of the UN Security Council and signatory of the Nuclear Non-Proliferation Treaty, is obligated by international law to engage in reasonable efforts to “end the arms race” and limit “nuclear proliferation,” Beijing has done none of these things.

In fact, China’s entire nuclear arsenal remains hidden from view, although minimal assessments see it growing to at least 1,000 warheads by 2030, a more than 300 percent growth from its current force level, which the head of United States Strategic Command recently described as “breathtaking.”

In addition, as former U.S. Air Force secretary Thomas Reed has detailed, has been the world’s biggest nuclear weapons technology proliferator, including to countries such as North Korea, Pakistan, Libya, Iran, and Iraq. Hardly a major power guilty of nothing but a “peaceful rise.”

As top nuclear analysts like Hal Brands and Rob Soofer and Matt Costlow have recently outlined, when the New START Treaty and companion U.S. deterrent strategy were adopted in 2010 (as reflected in the 2010 Nuclear Posture Review), it was assumed that the United States would only be facing one power with significant numbers of nuclear forces (Russia), and even then the narrative was that a more relaxed relationship with Russia—a “reset”—was in the offing.

Fast forward a decade: relations with Russia are now significantly more hostile. Major elements of Russia’s nuclear arsenal are completely modernized (over 88 percent according to Putin), while the entirety of China’s nuclear forces remains beyond any limits.

Thus, the United States is facing at least a two-to-one imbalance in strategic nuclear forces, and a ten or twenty-to-one imbalance in theater nuclear systems, while having to undertake deterrent policies both protecting the U.S. homeland and U.S. allies.

The implications for nuclear deterrence and arms control could thus not be starker. Contrary to the assumption that arms control could continue a somewhat automatic slide of reductions toward zero, the United States is facing the prospects—for the first time in multiple decades—that projected modern force levels of twelve Columbia-class submarines, 400 Ground-Based Strategic Deterrent ICBMs, and some sixty bombers will not provide an adequate future deterrent.

What then should we make of Congress’ assumption that nuclear modernization and arms control are two sides of the same nuclear deterrent coin, that one must go with the other? Unless China can be persuaded to change its attitude toward transparency in its nuclear forces and deterrent policies, and that Russia and China both agree to seriously put all strategic and regional nuclear forces on the table for verifiable limits, the United States is now entering an era where nuclear modernization is a task bigger than what it had previously planned, and arms control may go away as a major construct of U.S. deterrent policy.

Read in The National Interest