Northwestern Nigeria: A Jihadization of Banditry, or a “Banditization” of Jihad? 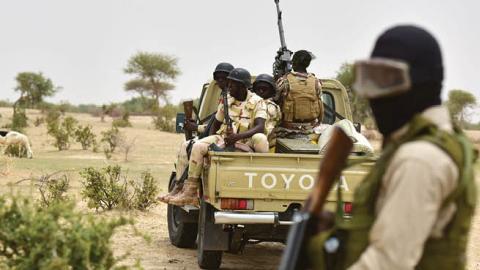 Caption
Niger Army armed forces patrol during a visit of Niger's Interior Minister to a camp for displaced populations near Diffa on June 16, 2016 following attacks by Boko Haram fighters in the region. (Issouf Sanogo/AFP via Getty Images)

Abstract: With the explosive growth of banditry in northwestern Nigeria in recent years, there has been growing speculation among Nigerian and international observers that these criminal insurgents are receiving support from or otherwise converging with jihadis based in the country’s northeast. However, a lack of open-source data on the inner workings of both banditry and Nigeria’s jihadi insurgencies have precluded detailed analysis of this potential “crime-terror nexus.” Drawing on the authors’ extensive fieldwork across Nigeria’s northern conflict zones in 2021 and early 2022, including exclusive interviews with both bandits and jihadi defectors, this article provides the first in-depth examination of the links between Nigeria’s bandits and jihadi organizations. While there are many reasons to expect that Nigeria’s bandits and jihadis would cooperate and that jihadis would recruit bandits to their cause, the authors show how this has not been the case. The authors argue that Nigeria’s bandits are too fractious and too powerful for jihadis to easily coopt them and that the bandits’ lack of ambitious political objectives—and the significant differences in the modus operandi of bandits and jihadis—means that jihadism holds little intrinsic appeal for them. However, jihadi groups have taken advantage of instability in the northwest enabled by the bandits to establish small enclaves in the region that they are likely to sustain as long as they can maintain a modus vivendi with local bandit gangs.