Prepare Ukraine for Victory in a Long War 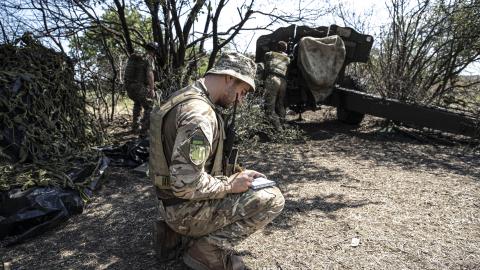 Caption
Ukrainian artillerymen check their weapons and special equipment before going to the frontline in Kherson, Ukraine, on July 15, 2022. (Photo by Metin Aktas/Anadolu Agency via Getty Images)

On February 24, Russia invaded Ukraine for the second time in eight years. While many assumed that the war would be short, a stiff Ukrainian defense halted and then successfully counter-attacked against the Russian advances on Kyiv, Sumy, and Kharkiv. After capturing Kherson, Russia’s main advance from occupied Crimea in the south toward Mykolaiv also stalled. At the time of writing, Ukrainian forces are beginning a counterattack in that region and are located approximately 12 miles outside Kherson city center.

Mariupol, on the Sea of Azov coastline, fell to the Russians on May 22 after Ukrainian forces made a heroic last stand in the Azovstal iron and steel works. This capture allowed Russia to create a land bridge from the Russian Federation to occupied Crimea. Mariupol’s capture also turned the Sea of Azov into a Russian lake.”1 In the Donbas, which is arguably Russia’s main effort at this stage of the war, Russian troops have made limited advances at a very high cost in equipment and manpower. In late June, Russian forces captured Sievierodonetsk after weeks of heavy fighting, leaving Russia in control of Ukraine’s Luhansk Oblast.

Ukrainians are currently defending a front line that is approximately 1,250 miles long—this is equal to the straight- line distance from Washington, DC, to Houston, Texas. Russian public opinion still supports the war.”2 While Russia’s advancements in the Donbas have been slow and costly, there is no indication that Moscow will stop its offensive anytime soon. President Vladimir Putin knows that his legacy rides on Russia’s victory or defeat in Ukraine.