Skip to main content
Reports
Russia Can Still Be Defeated, But Time Is Short 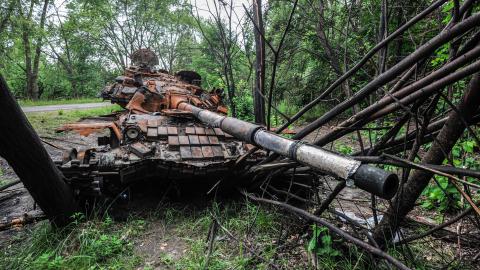 Caption
A destroyed tank of the Russian army is seen at Kukhari, Kyiv Oblast, on July 9, 2022. (Photo by Sergei Chuzavkov/SOPA Images/LightRocket via Getty Images)

At Davos last May, former Secretary of State Henry Kissinger sparked a controversy when he argued that Kyiv must cede territory to Moscow to achieve peace. Kissinger may well be correct to assert that a stable balance between Russia and Ukraine will require some trade-offs based on the principles of Realpolitik. But we should not delude ourselves into thinking that Putin—a former KGB officer who considers the collapse of the Soviet Union to have been the greatest catastrophe of the twentieth century—launched this war simply to secure a border readjustment. Putin’s essay, published in April 2021, expresses his view with admirable clarity: Ukraine, in the eyes of the Kremlin, is Russia. In sum, he launched this invasion to subordinate Ukraine to Moscow—totally and permanently.

We should also not conclude that Russia’s battlefield setbacks have been so severe as to deflect Putin from his original goal. After he failed to subordinate Ukraine swiftly with a quick knockout blow directed at the capital, Kyiv, he moved to Plan B: a strategy of exhaustion. He is now determined to grind Ukraine down slowly and deliberately with the expectation that eventually it will have no choice but to bow to his iron fist.

For its part, the West should thwart Putin’s strategy by safeguarding Ukraine’s political and economic independence. Kissinger’s comments did not bring us closer to achieving that goal. If members of the North Atlantic Treaty Organization (NATO) follow his lead and attempt to cajole Kyiv into ceding territory now, while Russia still believes it has the upper hand on the battlefield, their efforts will only whet Putin’s appetite for expansion. Putin will begin to entertain compromises acceptable to the West only when he comes to believe that failure to do so will lead inevitably to catastrophic losses for Russia. The bad news is that the military balance on the ground right now will not lead him to such a conclusion. If NATO members act quickly, however, there is still time to shift the dynamic in Ukraine’s favor—but it will not be easy.