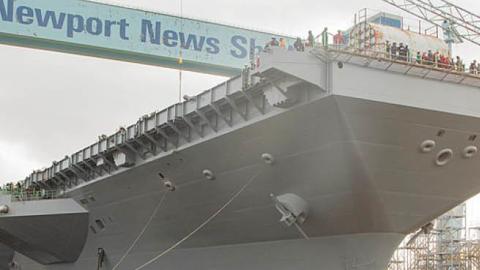 The U.S. Navy’s award this month of the contract for its new class of frigates starts the very necessary process of rebalancing the U.S. surface fleet, but the competition also highlighted the U.S. shipbuilding-industrial base’s increasing fragility.

If they lost, two of the four shipyards bidding on the frigate were at risk of either going out of business or joining the underemployed ranks of U.S. commercial shipbuilders. Due to specialization, only one or two yards construct each class of Navy combat ship with workforces, equipment, and infrastructure that would be expensive and difficult to adapt.

A decision on any single ship class, as with the frigate, can shut down a shipyard and send its workers to the unemployment line.

Specialization is also a problem when orders increase. The Navy’s two submarine shipyards, General Dynamics Electric Boat and Huntington Ingalls Industries’ Newport News division, shrank the time needed to build subs by 20 percent during the past decade while increasing production to two per year.

The rising sophistication of Virginia-class submarines has now reversed this trend, however, and submarine builders’ challenges are only increasing. They recently started a new contract to build up to 10 of the larger Block V Virginia submarines and are in negotiation with the Navy on a block-buy contract for the first two Columbia-class ballistic missile submarines.

U.S. shipbuilders may be fragile, but their suppliers are on life support. After decades of being whipsawed by changes to shipbuilding plans and budget uncertainty, a shrinking number of suppliers are able and willing to stay in business.

The Navy’s recent initiatives to improve supplier production capacity and resilience don’t go far enough to address its rising dependence on sole-source suppliers, which now provide more than 75 percent of submarine parts. For example, when problems with Columbia missile tubes led the Navy to seek new suppliers, it replaced the existing, sole source — BWXT — with another — General Dynamics — that will assemble tubes at the same facilities that are constructing parts for the Virginia and Columbia submarines.

Last year, the Trump administration used the Defense Production Act to establish new suppliers for military missile fuel. The Navy should build on this effort to identify sole-source items for which an additional supplier is appropriate.

In selecting additional suppliers, the Navy should prioritize attributes other than cost. Sole-source items by definition are important enough to justify seeking out or creating a single supplier rather than adapting the ship’s design to use an existing item. Therefore, the Navy should emphasize the provider’s track record in conducting similar or other challenging engineering; its ability to adjust to what will likely be variable demand and changing specifications; and the likelihood of quality production that avoids rework.

The Department of Defense could help address the shipbuilding-industrial base’s fragility with its current study of the number and mix of ships needed in the future fleet. Although the primary goal of this analysis should be determining the most effective fleet possible within likely budget constraints, it must also ensure the industrial base can build and sustain the future Navy.

Industrial base considerations are not new to Navy force structure planning. During the last decade, the Navy or Congress added amphibious ships, submarines, destroyers and auxiliary vessels to maintain hot production lines or keep a shipyard afloat until the next order. Each of the Navy’s new combatant ships are expected to cost more than $1 billion to build, constraining the Navy’s ability to spread ship construction to other qualified shipyards to fill production gaps or extend classes to keep a shipyard in operation.

The Navy could better support shipbuilders by rebalancing its fleet architecture to increase the number of smaller vessels such as corvettes or tank landing ships, and reduce the number of larger destroyers and amphibious warships.

Smaller ships could also be built at a wider range of shipyards, including those that only build commercial vessels and noncombatant government ships like Coast Guard cutters and oceanographic research vessels. These “dual-use” shipbuilders suffer today from a lack of coordination between commercial and government shipbuilding, which creates a feast-or-famine cycle of orders.

The Navy and nation depend on a healthy shipbuilding-industrial base. To foster the industrial base in the face of natural and man-made challenges, the Navy should change its fleet design and shipbuilding plans, while investing to establish and qualify new suppliers. Without deliberate action, the U.S. shipbuilding industry will become increasingly fragile, limiting the Navy’s ability to build the ships it needs and respond when today’s competitions turn to conflict.