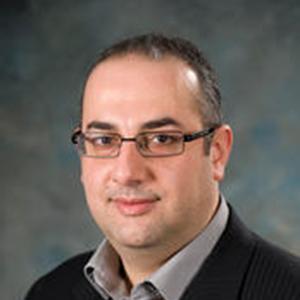 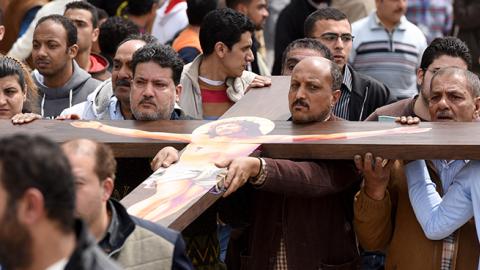 Caption
Mourners carry a large cross during a funeral procession on April 10, 2017 at the Monastery of Marmina in the city of Borg El-Arab, for the victims of the blast at the Coptic Christian Saint Mark's church in Alexandria the previous day (MOHAMED EL-SHAHED)

These extraordinary words were chanted by angry Copts in the Egyptian province of Minya who gathered to welcome the bodies of their newest martyrs after a gruesome attack by Islamic State jihadists on Friday that left 29 people dead. The first part is, of course, from the Islamic declaration of faith, which would normally be followed by declaring Muhammad to be God’s prophet. In the face of persecution and attacks for their faith, the Copts, who have persisted with their Christian faith in Egypt for the past 2,000 years, are making a statement by changing the chant. If they are being threatened with murder for their faith, then they embrace that faith proudly.

As the world becomes more aware of the continued persecution of Copts in Egypt, their lack of violent response to these attacks has been a source of bewilderment to some and disdain from others. Copts have endured centuries of discriminatory policies at the hands of successive Egyptian regimes, attacks and incitement by Islamist groups, and pogroms by their very neighbors. Yet there has not been a single Coptic terrorist attack as reprisal or violent response. For terrorism experts insisting that terrorism is the result of poverty or the lack of political freedom, the Copts — who are just as poor and unfree as the majority of Egyptians — stand as an anomaly and an unwelcome testament to the ridiculousness of their theories.

After the Palm Sunday twin bombings that left 45 Copts dead, a famous Egyptian TV presenter responded to the news that the wife of one of the victims had publicly forgiven her husband’s murderer: “What are you Copts made of? Copts have endured what no one has.” For some, this has been a testament to the Copts’ strength of faith, embodying their savior’s meekness. For others, including many young Copts, this has been the source of anger and self-disdain. “Why are we destined to die as sheep?” some of them ask.

But Copts are not being gunned down like sheep. In the face of persecution for who they are, they insist on proclaiming it with every act. Targeted by discrimination in employment, they insist on giving their children the names of saints. Insulted in the street for their faith, they carry that faith proudly in the tattooed crosses on their wrists. Threatened by attacks on their churches, they flock to them declaring their willingness to die for their faith. In the face of death, they show defiance; in the face of threats, they stand confidently. Their fathers and mothers had shed their blood for their faith for centuries, and their children are no less willing to do the same.

Much about the Copts bewilders the world. Separated from the rest of Christendom following a fifth-century Church council that relegated them to the fringes of the faith, their separation was further entrenched by a political one after the Arab invasion in 641. For centuries, they lay outside of Western awareness, seldom mentioned, constantly forgotten. Successive caliphs and rulers took their shots at the community, each undermining it further. The West was no better. When the Crusaders arrived at the region, they treated them as heretics; and the missionaries were no better, viewing them as objects of conversion.

For 2,000 years, Copts clung to the land of their ancestors, refusing to abandon it. They had few other options. In modern times, the gates of emigration would open to them, and they would rush through. One village tells the story. With a population of 25,000, Bayadeyah is one of two nearly completely Coptic villages in Egypt. After one Copt was accepted in the State Department’s annual residence permit lottery system back in the 1990s, the village inhabitants have pinned their hopes on getting green cards of their own. Every year, the entire adult population of the village submits applications. Their disproportionate number of applications results in a disproportionate number of acceptances. Today, 500 Copts from the village call the United States home, with most of them residing in the Northern Virginia counties of Fairfax and Loudoun.

Many Copts insist that they will never leave Egypt. The terrorists will not win, they proclaim, and the Lord who protected his people throughout these centuries will continue to shield them. But the Coptic exodus from Egypt is unfolding in front of our very eyes. Numbers are hard to determine, but based on my research, roughly 20 percent of Copts have already left Egypt in the past 50 years. With trends increasing both as a result of persecution in Egypt, and the increasing ability of immigrant Copts to bring relatives once they settle down, it is not unforeseeable that, in another 50 years, half the Coptic population will be living outside of Egypt’s borders.

A friend of mine often jokes that in a hundred years, the Coptic pope will still be called the pope of Alexandria, except it will be of Alexandria, Va., where his papacy will be based. He may be proved right.