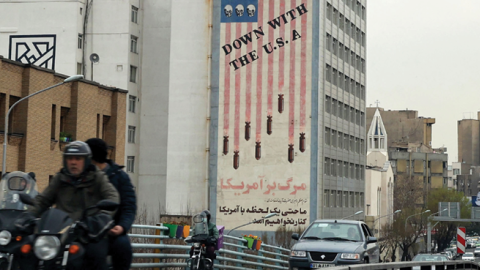 Caption
Vehicles drive on a street across from an anti-US mural in Tehran on March 12, 2022. (Photo by ATTA KENARE/AFP via Getty Images)

No matter what you call it, the Joint Comprehensive Plan of Action—JCPOA for short or “Iran nuclear deal” for convenience—is in trouble. Since Donald Trump pulled the U.S. out of Barack Obama’s agreement that ended economic sanctions on Iran in exchange for temporary limits on Iran’s nuclear activities, the deal has been the Schrödinger’s cat of diplomacy—sealed in a box, neither dead nor alive but in some indeterminate state.

These days, however, the stench from the box is getting harder to ignore. As Iran approaches the nuclear threshold, the saga seems to be moving toward a close.

In December Secretary of State Antony Blinken told reporters that “what we will not allow is for Iran to, in effect, tread water at talks, while at the same time advancing its program.” Iran was not deterred and has been merrily treading water and advancing its nuclear program ever since. Last week Britain’s intelligence chief told reporters that Iran had decided to reject America’s terms for re-entering the deal, though it was happy to let negotiations drag on. Last week the International Atomic Energy Agency’s head, Rafael Grossi, said that Iran’s nuclear program is “galloping ahead.”