The U.S. Election Could Be a Danger for Taiwan, an Opportunity for China 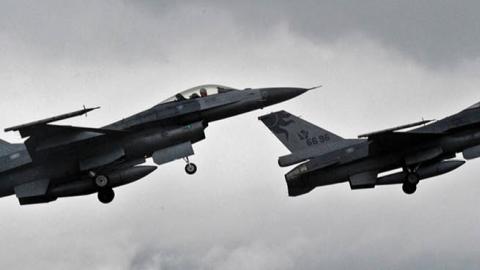 Caption
Two US-made F-16 fighters in the air during an scramble take off at the eastern Hualien air force base on January 23, 2013. The Taiwan air force demonstrated their combat skills at the Hualien air base during an annual training before the coming lunar new

Taiwan staged several military exercises in its regional waters this past week. Although the Taiwanese defense ministry would not disclose what it tested, it is likely — considering the “unlimited” flight ceiling that it mandated, and the involvement of Taiwan’s National Chung-Shan Institute of Science and Technology — that the exercises included Taiwan’s most advanced anti-ballistic missile or short-range ballistic missile capabilities.

Either missile would be critical in a confrontation between the mainland People’s Republic of China (PRC) and the Taiwanese Republic of China (ROC), by mitigating the ferocity of a Chinese first-strike or giving Taiwan precision retaliatory capabilities.

China, however, did not remain idle. Its air force violated Taiwanese airspace at least twice during the exercises, deploying Su-30MKK air superiority fighters and Y-8 transport aircraft. This force composition deserves greater emphasis. The Su-30 is one of China’s front-line combat aircraft, comparable to the U.S. F-15 and capable of defeating Taiwan’s most advanced F-16s in an aerial dogfight. The Y-8, a Chinese version of the Soviet An-12 heavy-lift transport, can be used to deploy paratroopers or as a maritime surveillance, electronic warfare, and drone deployment aircraft. While the Y-8 variant that China deployed remains unknown, the central point is clear enough: In a cross-strait conflict, a Chinese “strike package” will look very much like the force deployed last week.

This becomes particularly relevant when considering China’s increased aerial harassment of Taiwan over the past year. In mid-April, as COVID-19 exploded around the world, China deployed its only carrier battle group off Taiwan’s coast, transiting through the Miyako Strait that links Taiwan to Japan, then turning south to bracket the island from the east. Chinese airspace violations continued throughout April, May and June, ultimately violating Taiwanese airspace eight times in one month and six times in a single week.

These exercises are not just a complex form of political-signaling. They are military preparation for an assault on Taiwan, intended to subjugate it before the U.S. and its allies can respond.

Each military action is intended to test China’s operational capabilities and Taiwan’s responses. Moving a carrier group through the Miyako Strait tested Taiwan’s willingness to defend its most vital link to the U.S.’s Pacific alliance network, while transiting south may have offered insight about how Taiwan would shift its forces if a threat arose from the east. Probings throughout April, May, June and into July were designed to reveal how Taiwan would redeploy its air forces when faced with threats from different areas. Its air force is well-trained and does field several F-16 squadrons — but it mixes these with less capable planes, specifically the Indigenous Defense Fighter and mid-Cold War-era F-5 Tiger IIs.

Taiwan faces distinct numerical disadvantages: China fields around 600 air-superiority fighters in its Eastern and Southern theater commands against Taiwan’s slightly less than 400. China’s short-range missiles are concentrated overwhelmingly around the Taiwan Strait, held at high readiness for wartime bombardment. In the relevant commands, China fields two more army groups than Taiwan’s army, including 10 amphibious and five air-assault brigades, and nearly four times the active-duty personnel. Taiwan faces 32 Chinese attack submarines with only two of its own, and fields only 26 medium or large surface combatants against China’s 60.

This balance only considers regular military forces. China also fields paramilitaries, specifically the China Coast Guard and the Maritime Militia, that it can use to multiply its combat power. It holds extreme quantitative superiority over Taiwan and, at minimum, qualitative parity in multiple respects.

Nevertheless, an assault on Taiwan would not end in a quick victory. Taiwan’s armed forces draw from a robust reservist pool; it knows its territory far better than its adversary and will receive unimpeachable civilian support in a conflict. To win, China must occupy and subjugate the entire island — and an insurgency, based in Taiwan’s mountainous center, is to be expected. While this is a fight China considers winnable, it must bring to bear all its capabilities.

This will be impossible if China, unable to isolate Taiwan from the rest of the Pacific, faces the combined forces of the U.S. and its allies. Japanese, Australian and Philippine forces, fighting alongside forward-deployed U.S. air forces, carrier strike groups and submarines, will broaden and escalate the conflict. South Korea could become involved if the North chose to capitalize on the confusion and strike; even Vietnam and India could be drawn into a widening war. This conflict’s outcome is far from certain. But a long, brutal fight on multiple fronts will not serve China’s interests, particularly if an American blockade strangles China’s economy and prompts domestic unrest.

China’s military is, therefore, built to fight a short war, relying on long-range missiles and progressively layered defenses to isolate areas near the Chinese coastline. By raising the costs of American intervention, China seeks a political-military solution to its central strategic problem. Without U.S. coordination and support, Asia’s isolated states will fall, one by one, to Chinese power.

Forecasting political will is difficult, however. Chinese strategists must recall Imperial Japan’s failure to shatter America’s spirit in 1941. More broadly, while Western political elites have been averse to high-casualty conflicts, democratic electorates can be convinced of intervention if the stakes are sufficiently high, as public support for action in the former Yugoslavia, Afghanistan and Iraq demonstrated. China’s clear duplicity during the COVID-19 pandemic should allow American and allied leaders to make the case for a robust response to Chinese action against Taiwan. So should the certainty that all of America’s global alliances will be at risk if the U.S. fails to defeat a Chinese attack on Taiwan.

Hence, the danger of the current political moment: America’s partisan enmity has become so intense that any result in November will be contested; a country embroiled in a succession crisis is much less likely to intervene in a high-end great-power conflict. There may never be a better moment for China to strike than the week of Nov. 3.

Little can be done to reduce tempers in the current presidential race. But the U.S. possesses the ability to act and diminish the chance of a crisis in the Taiwan Strait — and appears ready to do so. On Wednesday, U.S. media began reporting that the United States will announce the sale of $7 billion worth of cruise missiles, mines and MQ-9 Reaper drones to Taiwan, exactly the weapons needed to help deter a Chinese blockade or invasion. This is wise policy aimed at discouraging China’s growing regional aggression, for which the administration deserves credit.