The U.S. Navy Lowers Its Sights 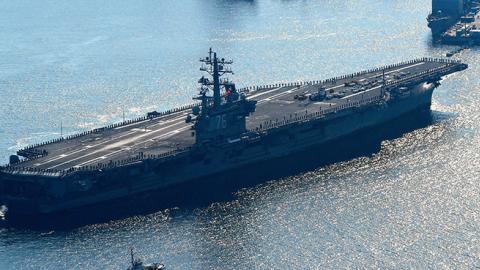 Caption
USS Ronald Reagan at the U.S. naval base in Yokosuka, Japan, December 4, 2017 (The Asahi Shimbun via Getty Images)

The U.S. Navy announced Tuesday that it will court-martial the officers who commanded the USS Fitzgerald and the USS John S. McCain last summer when they collided with other craft in the Pacific Ocean. They will face charges of negligent homicide, dereliction of duty and hazarding a vessel. In response to the collisions Navy Secretary Richard Spencer ordered a fleetwide review of strategic readiness. An independent team of civilian executives and former senior military officers delivered their sobering report last month.

The episode should serve as a wake-up call to military and civilian leaders alike. The U.S. has entered a new age of peer and near-peer competition for which the Navy is unprepared, according to the review’s findings. A much diminished fleet has been overloaded with tasks in recent years, yet the number of ships deployed around the world has remained constant. The Navy has managed this by increasing the time that ships and their crews spend at sea. “The net result has been a dramatic increase in the operating tempo of individual ships, and accompanying reductions in the time available to perform maintenance, training, and readiness certification,” according to the review’s authors. “The growing mismatch between the supply and demand of ships taxed fleet personnel and consumed material readiness at unsustainable rates.”

Accidents are inevitable under these circumstances. While enlisted sailors are spending more time away from their home ports, junior officers are spending less time at sea than is necessary to develop what the review calls “deep maritime operating skills.” Sailing a desk on a headquarters staff has became a path to timely career advancement. The review recommends freeing up officers from staff requirements so they can spend more time honing their war-fighting skills. It also urges a better fiscal balance among the operation of ships, equipment maintenance and personnel training—all vital, all expensive.

The most problematic recommendation requires acknowledging a difficult political reality. The Navy must communicate to political leaders “that the higher cost and time to achieve established readiness standards will mean less Navy presence worldwide.”

In September, the Government Accountability Office told the House Armed Services Committee that more than a third of the ships in the Navy’s Japan-based Seventh Fleet had expired warfare-training certifications. The review calls this a “normalization of deviation,” a problem that will persist so long as the Navy lacks the resources to fulfill its obligations.

If implemented, the review’s recommendations would restore the Navy’s readiness to respond to threats and flare-ups as they present themselves. But how, and at what price?

One option—a bad one—is for the Navy to reduce its global presence. As the review’s first sentence acknowledges, the Navy’s global primacy “is being challenged as it sails into a security environment not seen since before the collapse of the Soviet Union.” If achieving naval readiness requires ceding control of the seas to aggressive rising powers like China, Russia or Iran, it won’t be worth it.

A better alternative is to increase the size of the fleet so that necessary maintenance, repairs and training can ensure America’s ability to project naval power from the Western Pacific to the Eastern Mediterranean, from the Arctic to the Arabian Gulf, and to other areas of current—and future—competition with rivals. At the top of this list must be the Baltic and Black seas, where Russian influence is expanding.

As a candidate, Donald Trump pledged to increase the size of the Navy from approximately 275 combat vessels to 350 or more. But in December the administration’s national security strategy document signaled a shift in the president’s thinking. While the document claims the Trump administration supports modernization, acquisition reform, improved readiness and a “full spectrum force,” it does not call for a 350-ship fleet. When it comes to sea power, the U.S. is lowering its sights.

A flexible Navy that retains the ability to respond to threats as they emerge and a fleet large enough to defend vital U.S. interests are not mutually exclusive. But the Trump administration appears to have concluded that since lawmakers are unlikely to pay for construction of a large number of new warships, it won’t even ask them to. It’s a different vision for America’s naval future from the one Mr. Trump outlined on the campaign trail. He was right then; he is wrong now. There’s still time to reverse course.