To Deter China, Relearn The Lost Art of Dissuasion 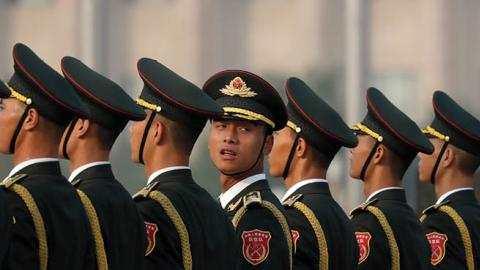 Caption
Members of a Chinese honor guard stand in formation before a ceremony to mark Martyr's Day at Tiananmen Square in Beijing, Monday, Sept. 30, 2019. (Photo by Mark Schiefelbein - Pool/Getty Images)

In its upcoming defense strategy, the Biden administration will attempt to balance challenges from an increasingly capable Chinese military against fiscal constraints imposed by other domestic spending and rising fears of inflation. Congressional authorizers are correct that defense budgets can be higher, but short of continuous wartime mobilization, the U.S. military may soon be unable to prevent Beijing from overpowering neighbors like Taiwan. Chinese leaders are also unlikely to believe the United States would launch nuclear weapons in response to conventional attacks against overseas U.S. territory or allies. The Pentagon’s strategy will therefore need a more sophisticated approach to deterring war than simply threatening denial or punishment.

Strategists have long argued that the United States could dissuade potential adversaries through a combination of raising the costs of aggression, increasing opponents’ uncertainty about their plans, and reducing the potential benefits by making targets less attractive or threatening economic, political, or military repercussions. During the 1950s, this orchestration of efforts was often reframed as deterrence, with the emphasis on nuclear retaliation increasing when NATO forces fell behind their Warsaw Pact counterparts.

Unfortunately, the multi-dimensional nature of deterrence was forgotten during three decades of post-Cold War U.S. military dominance. Pentagon leaders came to believe opponents could be convinced their aggression was certain to fail or they would suffer catastrophic consequences if successful. This belief underpins today’s U.S. defense strategy and programs and requires the U.S. military to pour its resources into attempting to win a conflict against China over Taiwan that may never end better than a draw and is unlikely to be the most stressing or most common form Chinese or Russian aggression could take.

Authoritarians in Beijing and Moscow increasingly rely on “gray zone” tactics that combine proxy and paramilitary operations with political warfare, industrial espionage, and economic actions to, say, annex Crimea or build islands in the South China Sea. By avoiding thresholds that would justify a military response, revisionist powers undermine U.S. assurance of allies. And if a tripwire is inadvertently breached, Chinese or Russian forces may have already gained an upper hand in their own backyards of the Taiwan Strait or Baltic states, respectively.

Comprehensive Chinese and Russian campaigns caught the Pentagon flat-footed by because its doctrine conceptualizes conflict as a steady progression from peacetime competition through crisis, deterrence, and conflict. But today’s warfare scrambles these phases and incorporates a growing array of new tools. The U.S. military should rediscover the art of dissuasion.

The cyber community has already embraced the end of deterrence as we knew it. In 2017, Gen. Paul Nakasone, who leads U.S. Cyber Command, concluded that most cyber operations ignore the Pentagon’s phasing construct and are unlikely to be deterred by threats of denial or punishment. So he introduced the framework of persistent engagement, under which cyber forces are expected to grapple with adversaries every day to understand their tools and tactics. Lessons from these exchanges, in turn, guide future operational and technical innovation.

More importantly for dissuasion, persistent engagement allows U.S. operators to better inform adversaries about U.S. capabilities, intentions, and responses. And by sensing when competition is turning from competition to crisis or conflict, U.S. cyber forces can better withstand the initial blows of an attack and adapt in response.

The rising importance of information technologies may result in all confrontations looking more like today’s action in cyberspace. Ubiquitous space and airborne sensors will provide nearly continuous observation of friendly and adversary forces, spurring new efforts at counter-detection and deception. Once identified, opposing units can be engaged by electromagnetic and cyber attacks, influence operations, or criminal activity regardless of whether a war is underway. An approach like persistent engagement may be needed to counter these efforts by showing enemies the associated costs, uncertain results, and consequences.

Even if the U.S. military cannot stop Beijing from moving on Taiwan, it could use persistent engagement to make invasion an undesirable option. For example, the Pentagon could increase Chinese leaders’ uncertainty through a concerted campaign of revealing new U.S. capabilities, contesting Chinese use of the electromagnetic spectrum, and changing U.S. military posture in and outside the Western Pacific in ways that would raise the costs of aggression. Allies and the interagency could complement military actions by suggesting economic repercussions against China’s global interests or Belt and Road Initiative investments.

Some of these tactics are surely under consideration by the U.S. government. However, the U.S. military’s reliance on deterrence by denial or punishment relegates capabilities beyond those that counter or conduct attacks to supporting roles. A more comprehensive approach will be needed as China’s leaders grow more confident in their ability to achieve military objectives.

As attrition becomes a less useful tool for deterrence and the gray zone emerges as a preferred venue for Chinese and Russian aggression, military operations and national security activities are becoming more important as communication than as ways to damage or destroy the enemy. Success will require understanding how foreign leaders make decisions and discerning how communication occurs between them and their U.S. counterparts, especially the inadvertent or faint signals that make up most of the information passed between people or governments.

Just as Cold War strategists successfully employed a multi-disciplinary portfolio of actions to dissuade Soviet aggression, authors of the new U.S. defense strategy should rethink the catechism of “deter, and if necessary, defeat” aggression and reframe U.S. goals to focus on preventing war through dissuasion.