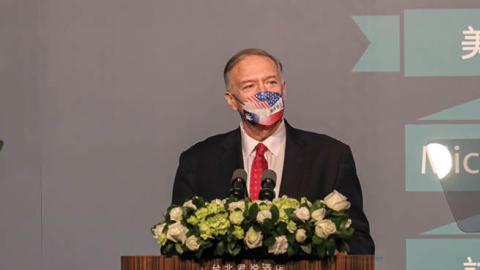 __Following is an excerpt from a March 4, 2022 speech by Secretary Michael Pompeo at the Taiwan Prospect Foundation in Taipei__

While the U.S. should continue to engage the People’s Republic of China as a sovereign government, America's diplomatic recognition of the 23 million free Taiwanese people and its legal, democratically elected government can no longer be ignored, avoided, or treated as secondary.

It is my view that the U.S. government should immediately take necessary, and long-overdue, steps to do the right and obvious thing, that is to offer the Republic of China (Taiwan) America’s diplomatic recognition as a free and sovereign country. This is not about Taiwan’s future independence, it is about recognizing an unmistakable, already existent reality. That reality is this, as many of your past and present leaders have made clear, there is no need for Taiwan to declare independence because it’s already an independent country. Its name is the Republic of China (Taiwan). The people and government of the United States should simply recognize this political, diplomatic and sovereignty reality. The Taiwanese people deserve the world’s respect for a free, democratic and sovereign country.