Three Foreign Policy Priorities for the New US Congress 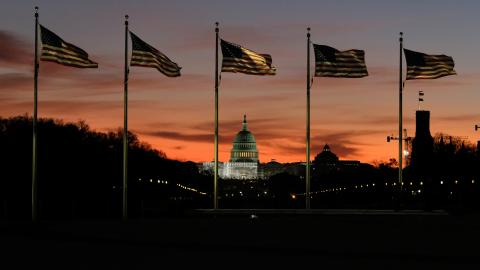 Caption
The US Capitol building as seen from the National Mall at dawn on November 8, 2022, in Washington, DC. (Robert Miller/The Washington Post via Getty Images)

After months of suspense and expectation, the results of the US midterm elections surprised a lot of people. While many were expecting the Republican Party to sweep the board in both the House of Representatives and the Senate, the so-called “red wave” never materialized.

Instead, while votes are still being counted, the Republicans are heading for a majority of only a handful of seats in the House, and control of the Senate remains undecided; it may come down to a run-off vote in Georgia in December.

Considering that inflation and violent crime are at record highs in the US, this mediocre performance by the Republican Party came as a shock to many. Everyone in the Republican camp is pointing fingers and apportioning blame. Meanwhile, the Democrats are breathing a sigh of relief — the results could have been a lot worse.

The midterm election campaign had been dominated by the “bread and butter” issues of American society —the cost of living, the economy, and immigration. The electorate was also motivated by matters that are almost unique to American politics, such as abortion and gun rights. For the most part, there was no meaningful foreign policy debate during the campaign, other than a few outspoken candidates criticizing US “blank check” support for Ukraine.

Much authority in American foreign policy making is rooted in Article II of the US Constitution, which gives the executive branch and the president considerable powers. However, as part of the system of checks and balances, the legislative branch also plays an important role. As the new Congress meets next January, there are three pressing foreign policy issues that it should focus on.

The first is the war in Ukraine. Since Russia’s invasion began in February, the US Congress has authorized $60 billion to help Ukraine defend itself. While support for Ukraine has enjoyed bipartisan support in the US Congress, there is a small, albeit vocal and slowly growing, minority who are critical of sending more US aid.

It is in America’s interest that Ukraine can defend itself. The war is at a pivotal point and Ukraine is on the front foot. The Ukrainian advance on the city of Kherson has delivered the biggest blow to Russia in the war to date. When the new Congress meets early next year, it should continue to provide support for Ukraine. The new Republican leadership must ensure that there are enough votes for future aid packages.

Second, the new Congress needs to send a message to the White House that it will not rubberstamp any deal with Iran. During the 2020 presidential campaign Joe Biden had one major foreign policy pledge: to rejoin the Iran nuclear deal that Donald Trump had left. He seems determined to do this at any cost. In the past 18 months, Iran and its proxy forces have used ballistic missiles and drones to attack civilian infrastructure and US military bases across the Middle East. Meanwhile Tehran has been cracking down on protesters at home while supplying Russia with suicide drones that have been targeting Ukraine’s electrical grid.

Any objective assessment of the situation would conclude that the talks in Vienna are a waste of time, and a new deal cannot be had with Iran. In recent years there has been bipartisan support in the form of non-binding congressional resolutions demonstrating concern about the White House's approach to the Iran talks. When Congress convenes early next year, it must apply even more scrutiny and pressure on the White House when it comes to Iran.

Finally, Congress should put Afghanistan back on the agenda. Although the process started under his predecessor, it was ultimately President Biden’s decision to withdraw from Afghanistan last year. This fiasco emboldened America’s adversaries and made its friends question US commitment and resolve. The return of the Taliban to power and the disorderly withdraw of the US from Afghanistan was a stain on America’s prestige and honor.

To make matters worse, it has recently been reported that the Biden administration has given the Taliban regime in Kabul about $1 billion in aid. So far nobody has been held accountable for what was the greatest US foreign policy failure in a generation. The new Congress should use its legislative powers to hold the White House to account and investigate the circumstances and decision-making processes that lead to the Taliban’s return to power.

Of course, Congress’s main focus is going to be on the domestic agenda. This is what representatives and senators were elected on. It will be the issues of the economy, immigration, and the ongoing culture wars in America that will decide who wins the presidency in 2024.

Even so, the world is growing increasingly dangerous. Congress cannot ignore its obligations and role in the formulation of American foreign policy.

After seeing what happened in Afghanistan last year, the American public is not sure if it can trust the Biden administration on the big foreign policy issues.