Most of us who follow the news have seen the heart-rending photos of weary parents holding beautiful, brown-eyed babies, making their way to Europe in search of a better life. We’ve seen barbed-wire borders, evacuees fleeing across deserts and the tragedy of capsized boats and lost children. We’ve also watched the behavior of newly arrived young Muslim males toward women, particularly in Cologne, Germany on New Year’s Eve.

The word “refugee” is on many people’s lips as a virtual tsunami of Middle Easterners and Africans floods Europe, setting in motion a seemingly never-ending drama.

Winter weather has slowed the pace of perilous sea crossings between Turkey and the Greek islands. But the political storms directed at Europe’s leadership – and outrageous behavior on the part some of the migrants – seem to be intensifying.

Germany’s beleaguered chancellor, Angela Merkel, initially adopted an open-arms policy toward migrants (leading to burgeoning numbers of arrivals into Europe) alongside raging debates about the wisdom of her decision.

On Jan. 30, Merkel announced rather belatedly that many of the refugees will be expected to leave Europe and return to their homes once the Syrian civil war has ended.

Germany’s Chancellor Angela Merkel Saturday said she expects many refugees to leave Europe’s largest economy once the war in Syria is over, addressing public concerns the country won’t be able to cope with the continued influx of immigrants.

“We expect that once peace is restored in Syria” and once terror organization ISIS is curtailed, many refugees will return back home, Ms. Merkel told members of her conservative Christian Democratic Party at a gathering broadcast on German television.

Some laughed at Merkel’s optimistic declaration. But the desperation of many refugees is not in question. The war-torn Middle East – Syria and Iraq, along with Turkey, Lebanon and Jordan – is roiling with the displacement of millions. Some have fled Syria’s war, while others have run for their lives from the Islamic State. Many have languished in miserable refugee centers and squalid displacement camps for years.

The refugees’ fragile hopes of returning to their homes have been shattered, much like the houses and villages they once populated.

However, along with the genuinely displaced and dispossessed Syrians, Iraqis and even Iranians, thousands of economic migrants have also joined the parade, traveling from North and Sub-Saharan Africa and beyond to seek a new beginning in prosperous Europe’s welcoming embrace.

Meanwhile, there are repeated warnings, not only from security forces and police, but also from some of the refugees themselves (see below) that ISIS has quietly infiltrated the tide of evacuees.

After visiting some displaced Christians in Kurdistan a little more than a year ago, I had another recent opportunity, as I traveled back to Jerusalem from the United States, to listen to some other concerned voices. They told me not only about the ongoing refugee drama, but also about the Islamist ideology that overshadows it.

The first person I met with was Baroness Cox, former deputy speaker of the House of Lords in the United Kingdom and an indefatigable warrior for human rights in the world. I had the honor of writing a biography of Lady Cox a few years ago, Baroness Cox: Eyewitness to a Broken World. We shared a lovely mid-January dinner in London. 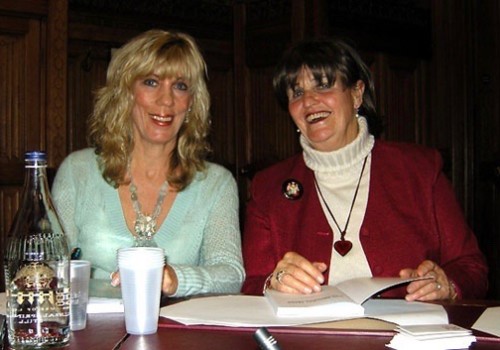 I wanted to hear from the baroness about the “private members’ bill” she has recently introduced to the House of Lords. She has done so, working with British Muslim women’s organizations, in hopes of addressing some of the dangers and struggles they face.

I asked her why she is concerned about the practice of Sharia (Islamist) law in Britain. Does it really cause suffering to Muslim women? Here’s what she told me:

As a result of the rulings of Sharia Councils/Courts operating in this country, which not only discriminate systematically against women in ways which would make our suffragettes turn in their graves, they also represent a threat to the fundamental principle in our democracy of “One Law for All.”

Essential tenets of Sharia Law include many forms of systematic gender discrimination against women such as:

– Asymmetrical access to divorce: A man can divorce his wife merely by saying, “I divorce you” three times. The woman has to pay and also often to fulfill other requirements, which may be difficult or impossible for her.

– Polygamy: Under Sharia Law, a man may have four wives; some Muslim women in this country say they often have no choice. Sometimes they are married into a polygamous marriage without even realizing it is polygamy.

– Inheritance provisions: Under Sharia Law, a girl or woman characteristically receives half the amount of legacy left to a man or boy.

– Unequal respect and weight of evidence: In a Sharia Law context, a woman’s evidence is deemed to be half the value of a man’s, and therefore two women may be required to testify compared to one man.

I also asked the baroness whether the massive number of refugees flooding Europe and the ongoing reports of sexual abuse by male immigrants might awaken the West to the issues about Sharia law that she is addressing.

“This is a complex, confused and confusing issue,” she told me. “The UK has an honorable record of providing refuge to genuine refugees, which would include, for example, some of the Christians and Yazidis fleeing from ISIS terrorism in the Middle East. However, there is a real fear that many of those seeking to come to the UK are not genuine refugees and may include member of ISIS or activists with some related Islamist agenda.”

After hearing these troubling words from Baroness Cox, I flew to Munich, Germany the following day. There I found people who have lived under the shadow of the Islamism Lady Cox described, and have suffered in greatly because of its brutality.

Binan is a soft-spoken Yazidi woman who arrived in Munich before the notorious 2014 ISIS assault on her people. Today she is working with admirable tenacity and humility to help her co-religionists. She has lost many friends and most of her extended family to the murderous violence.

Even before ISIS emerged in a blaze of horror, in her Iraqi village (in Nineveh), Binan saw friends and acquaintances gunned down by radicals for such crimes as purchasing alcohol or eating during the Ramadan fast.

Eventually, her village was wiped out entirely during the 2014 invasion, and the threatened families fled on foot toward Sinjar. Few survived. Stories about the violence against women that the Yazidis subsequently suffered – from rape to kidnapping to sexual slavery – are well known.

A day or two later, a friend and I shared pizza with a young man and woman who had recently arrived in Munich from Syria. They are Assyrian Orthodox Christians. He is from Damascus; she is from Latakia.

I won’t reveal their names, as they continue to be at risk. We’ll call them “Miriam” and “Yako.”

Binan has described the Yazidis as “a minority within a minority [Kurds].” The two Syrians I spoke to are in similar circumstances – Christians among the largely Muslim refugee minority in Europe.

After an agonizing farewell to their families, Miriam and Yako crossed into Turkey, found their way on foot to the coast (which took more than a week) and braved the notoriously dangerous journey across the water to Greece.

“The worst 17 hours of my life were in that boat,” Miriam told me. “The smugglers threw away our backpacks – food, water and whatever we’d tried to take with us.” Thankfully, they had hidden their documents under their clothes. “We were so crowded in the boat we could hardly move. The sun burned our skin. And everyone was deathly seasick.”

But other dangers awaited them. Miriam is a beautiful young woman. Along the way, Muslim men continuously assailed her. They groped her, threatened her, spit on her, followed her and at least once attempted to rape her.

“I had to constantly watch over her,” Yako recalled. “She didn’t even dare to visit the toilet on her own.

“I’ve heard,” I began, hoping I wasn’t bringing up a touchy subject, “that there may be terrorists among the refugees. Did you have any reason to think so?”

They looked at each other and nodded. “Yes, there were Daesh (the Arabic word for ISIS or Islamic State) with us.”

“By things they said,” Yako told me. “You could even tell by the way they behaved.”

“And the look in their eyes,” Miriam added, with a shudder.

“No, many!” she said emphatically. “There were many,” Yako agreed.

For Westerners – Europeans and Americans alike – questions about the refugees often relate to the financial burden they will place on their host countries, or about their inability (or refusal) to assimilate culturally. And, of course, the possibility of jihadi infiltration is unquestionable.

But there are other considerations.

My new Yazidi friend Binan said something especially poignant at the end of our interview. I asked, “If you could say anything to the people in the West about what has happened to the Yazidis, what would you tell them?”

Then her voice broke. “I want to apologize for being in Germany. We are sorry to be here, but we became refugees in our own country, and were in great danger. We could do nothing about that.”

Christian and Yazidi refugees. Muslim women and girls trapped in Sharia enclaves. They all need our prayers. They – and those who help them, like the baroness and Binan – need our voices to tell their stories. And they need our wholehearted efforts to provide them with hope for the future.

The Origins of Boko Haram—And Why It Matters

Over the last decade from 2009-2019, Boko Haram has waged a campaign of mass violence and wrought havoc in Africa’s Lake Chad region, which comprises ...

An ongoing Islamic extremist project to exterminate Christians in sub-Saharan Africa is even more brutal and more consequential for the Church than it...

Iran's Missile Launch Could Actually Symbolise the Start of Deescalation

In an interview on BBC Breakfast, Mike Pregent discusses why Iran’s missile launch could symbolize the start of de-escalation. ...