The closing reports on the Obama administration’s drug policy were delivered this week. Drug-induced deaths for the year 2015 were reported by the Centers for Disease Control (CDC) on December 8, and the youth school survey of drug use for 2016, Monitoring the Future (MTF), was just released by the National Institutes on Drug Abuse (NIDA). The findings document Obama’s eight years of unbroken failure.

Simply put, it appears inescapable that the two sets of findings are related, in that the flood of commercial, high-potency marijuana unleashed by legalization in the states has served as a “gateway” to the opioid problem, both by priming greater drug use by those who initiate with heavy, developmentally early marijuana use, and further by empowering the illicit drug market controlled by criminal cartels.

Both data releases were somewhat muddled in the offering, neither of them being presented with public briefings at venues such as the National Press Club, as was common in the past.

Instead, the MTF data were only presented in a teleconference for reporters, while the CDC at the last minute determined that the official data for drug overdoses would not be ready until next year, instead directing researchers and the press to their online data system, WONDER, where searchers could uncover them for themselves.

These data releases are bookends—the youth survey showing us the likely future patterns of drug misuse as the high-school-aged cohort ages through adulthood, while the CDC overdose death data are retrospective, revealing where the worst drug epidemic in American experience was more than a year ago.

Data on deaths for 2016, which by all indications from states and municipalities are accelerating upward even more sharply, have not even been analyzed yet (their release is scheduled for December 2017), and will no doubt surface as a further shock in a succeeding administration.

Regarding the recent increase, the head of death statistics at the CDC stated; “I don’t think we’ve ever seen anything like this. Certainly not in modern times.”

For the MTF survey, marijuana use rose between 2015 and 2016. High school seniors saw their past month (or current) use rise to a rate of 23 percent, (up from 21 percent in 2015), while past year use rose to 36 percent (up from 35 percent). For the past year category, the rise since 2007 exceeds a 12 percent increase, but most of that rise took place earlier in the Obama years, peaking in 2011-2012 and then stabilizing at the higher level.

Somewhat surprisingly, given the anticipated impact of commercial legalization of marijuana in some states in 2014, with yet other states being added in this last election cycle, the overall impact on youth marijuana use appears modest, especially when compared to the wider data showing steep increases in young adults and those 26 and older, from other national surveys.

There are two immediate cautions in reading these data, however. The first is that many teens are now consuming marijuana in forms other than smoking; that is, as edibles and drinks, which this survey has difficulty detecting. In other words, there may be a hidden dimension of use of what is now a drug of unprecedented potency and availability.

The second caveat is the known impact of marijuana use on high-school drop-out rates, pushing them higher. The effect is that the very students most at risk of heavy use are no longer captured in this school-based survey, which might be systematically understating actual prevalence increases because we have lost our ability to capture them.

The real drug use stunner lies elsewhere, largely in the CDC overdose data. The United States is in the grip of a wide and deepening drug use crisis, the most visible alarm being the opioid overdose contribution to the overall drug-induced death data, which by 2015 were sufficient to show up in general health data as driving a decrease in American life-expectancy tables. 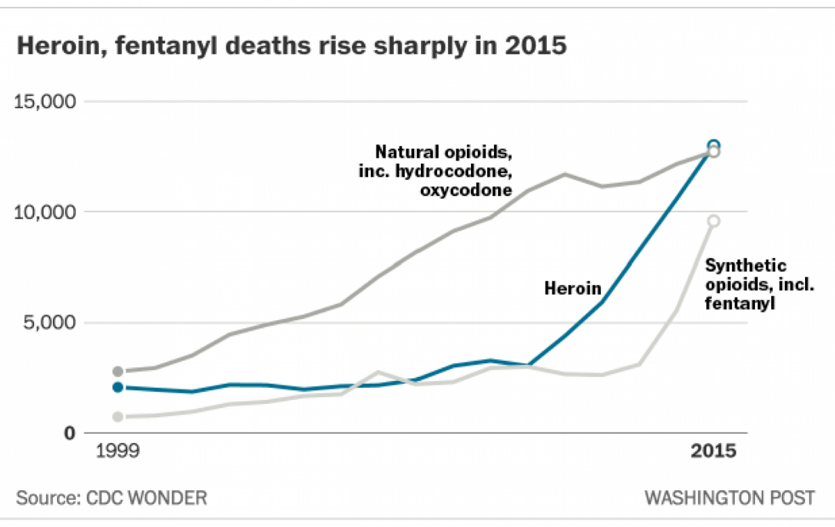 Moreover, it is clear that the situation will worsen quickly, for both opioids and for newly resurgent cocaine use, which also registered as an increase in drug overdose deaths, and in recent measures of college-age youth, where use of cocaine, after steep declines, suddenly shot up 63 percent in a single year, 2013-2014, and remained high. 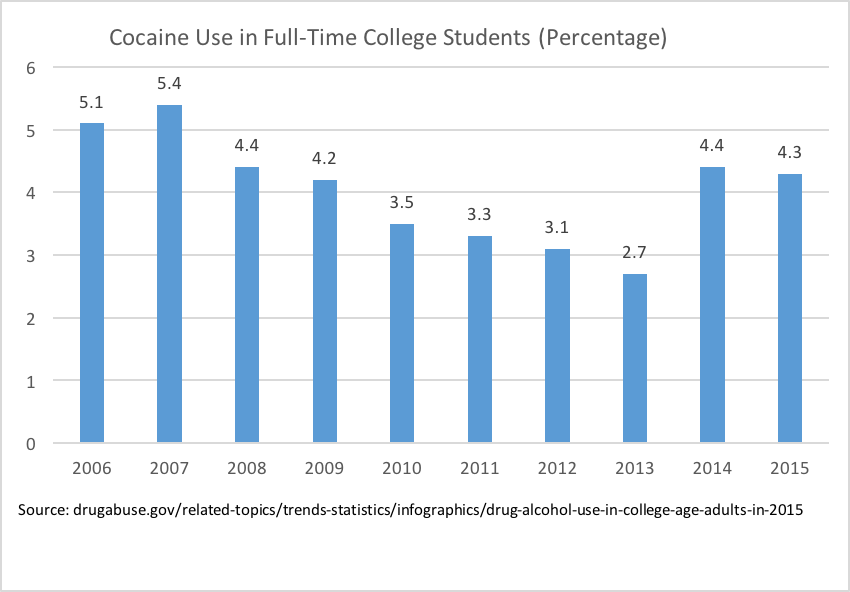 Coupled with the nationwide spread of adult commercial marijuana use and the still surging methamphetamine crisis, the situation is dire across all the major illicit drugs.

The opioid crisis has two dimensions, only one of which has received administration attention. The epidemic has been driven by misuse of prescription opioids, which climbed steadily for several years, and by the emergence of surging illicit drugs, both heroin and new synthetics like fentanyl and its analogs, from illicit rogue labs and smuggled into the United States.

Curiously, even though production increases of heroin and of cocaine have shot up in source countries such as Mexico and Colombia, and as synthetic opioid seizures have rocketed up in border seizures, the administration and the press seem seized by the prescription overdose dimension, which has begun to slow and even abate.

For instance, outlets such as the Washington Post continue to misstate the actual data. In a recent editorial, they insist that “the prescription opioid category accounted for the largest share of deaths, at 17,536.” Accordingly, they urge further policy attention to doctor prescribing practices.

But the latest data show otherwise. According to the CDC WONDER database, there were 19,885 deaths from illicit opioid production, heroin/illicit fentanyl and analogs. And that latter category is the one surging, rising 23 percent for heroin and a stunning 73 percent for synthetics from 2014 to 2015, while strictly prescription deaths rose only 4 percent.

Apparently, the blind spot for the administration (and the press) is that to address the real engine of overdose deaths, they must confront international and cross-border production and smuggling, an understanding of the problem that the Obama administration has abjured, since it requires the forces of law enforcement, national security, and reductions in illicit drug supply.

Two final notes on the 2015 opioid data, which are but harbingers for the hurricane of use and deaths already being seen in the states for 2016.

First, the steep line of ascent for overdose deaths can be closely paralleled by the administration’s mainstay, the insistent distribution and use of naloxone, the opioid overdose antidote medication. Without that reversal drug being deployed, the true death toll would be much worse. But it also means that simply giving out more and more naloxone cannot be a solution to the crisis, as deaths have accelerated away in spite of a reliance on such measures, which prove ineffectual in the long run and faced with new potencies.

The second sobering realization can be found in an analysis we published on the crisis in November, where we noted that for 2014, heroin overdose deaths were now comparable to those from gun homicides nationwide, both standing at 10,500 per year. The point may have been an inspiration for the Washington Post article on CDC WONDER data for 2015, proclaiming that heroin overdoses now exceeded gun homicide deaths (12,989 to 12,979, respectively).

The fact is true, but what is remarkable is the deep parallel in the rise of the respective figures in a single year, both keeping pace by climbing at a nearly identical rate.

It’s almost as if the trafficking in heroin driving the overdoses is itself tied to the emergent gun homicide crisis surging in our major cities. Those who lived through the violent 1980s and early 1990s will remember the connection well.

The Obama drug policy began with unilateral executive action opening the floodgates to marijuana commercial legalization and it is closing with never-before-seen death rates from drug use. The Trump administration faces a drug death epidemic worse than the crisis the Reagan administration inherited from President Jimmy Carter—and that contributed to even greater levels of violence and addiction before the Carter legacy was reversed.

The Impact of Drug Decriminalization

Fentanyl as a Chemical Weapon

David Asher appears on the Brett Winterble Show to discuss China's use of fentanyl as a chemical weapon against the US....