Secretary of the Navy Ray Mabus announced the results of a much-awaited internal review of fleet size known as a “Force Structure Assessment.” It appears that the Navy is setting its sails to the winds of renewed great power competition. The assessment states a requirement of 355 ships that Mabus declares must “continue to protect America and defend our strategic interests around the world, all while continuing the counter terrorism fight and appropriately competing with a growing China and resurgent Russia….”

The previous force structure assessment completed in 2012 called for a fleet of 308 ships, and that requirement has served to buttress Mabus’ position in the recent conflict with Defense Secretary Ash Carter over the 2018 budget and the size of the fleet. This new assessment (along with President-elect Trump’s stated desire for a 350-ship Navy) adds additional heft to Mabus’ reported position. The table below summarizes each of the ship classes contemplated in both this assessment and the previous one conducted in 2012. 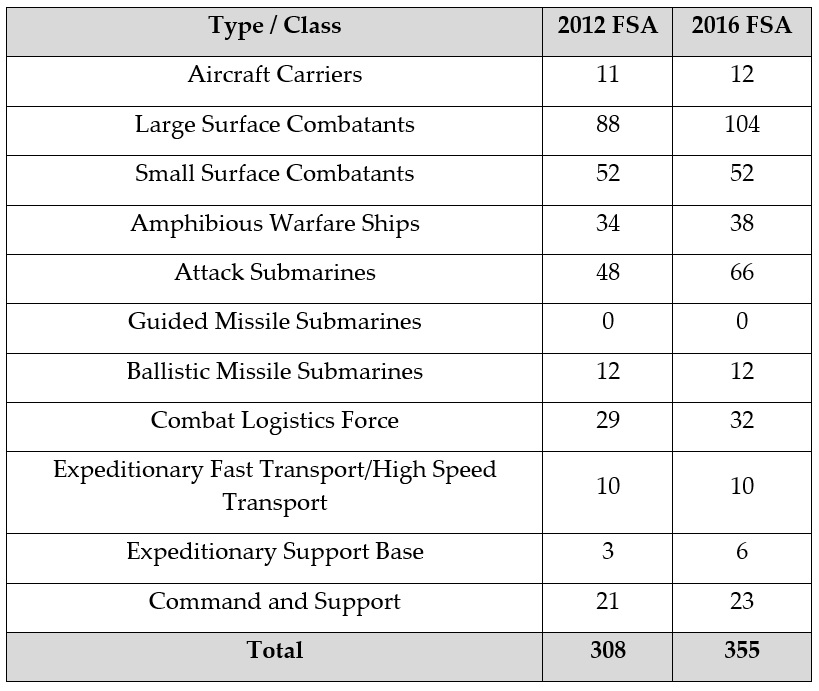 The naval aviation community, in order to foster a culture of thorough but impersonal mission debriefing, uses the practice of “goods and others” to review performance, with “goods” corresponding to what was found to be positive, and “others” corresponding to everything else. This approach seems appropriate to an analysis of the issue at hand.

The centrality of great power competition. Although the strategic assumptions underpinning this assessment are classified, Mabus’ statement makes it clear that renewed great power competition is the primary impetus for advocating for a dramatic increase in fleet size. There have been reports that the Pentagon was instructed to limit its emphasis on great power dynamics, but it appears that the Navy recognizes its unique and critical role in managing this competition by providing a credible, forward deployed deterrent.

Increase in attack submarines. Attack submarines are incredible intelligence, surveillance, and reconnaissance (ISR) assets, in addition to being unmatched killing machines in wartime. What is not stressed in the announcement is that while the requirement for attack submarines was 48, the number in the fleet is headed downward to 41 as Reagan-era submarines built at a clip of three per year are replaced by Virginia-class hulls built at two per year. Clearly, the nuclear industrial base is in for a boost. For the 66 attack submarines called for in this assessmentto be realized, three per year should be constructed, even as the Navy replaces its aging Ohio-class ballistic missile submarines.

An additional aircraft carrier. The Navy should be present in three major theaters (Europe, the Middle East, and the Pacific) and a fleet of 11 aircraft carriers is insufficient to meet those demands. That the Navy currently only has 10 carriers (due to a waiver the Congress granted to its legal requirement for 11 while the USS Gerald Ford (CVN 78) is constructed), further exacerbates the problem.

Additional amphibious ships. Amphibious ships are notoriously in high-demand due to their utility and flexibility. The Marine Corps has consistently stated its requirement to be 38 ships, and it appears that the Navy is finally consenting to meeting that requirement.

This is a force structure assessment and not a fleet architecture. What was released today is the distilled product of serious analysis by the Navy, but it is still just a projection of the major forces it will need to do its job in the decades ahead. Unanswered are questions such as 1) What does the Navy believe that job to be? 2) How will the carrier air wing evolve to meet the demands of the anti-access challenges posed by great powers (and others)? 3) What is the role of unmanned vehicles in the future fleet, how will they interact with the manned fleet, and how should their presence be counted? 4) What changes in employment and posture are required to meet the challenges of emerging great power competition, beyond simple fleet growth? Congress was interested enough in questions of this nature that it directed the Navy in 2016 to conduct a series of alternate fleet architecture studies, the results of which have not been made public. I was privileged to assist Bryan Clark of the Center for Strategic and Budgetary Assessments (CSBA) in one of the fleet architecture studies, and while I cannot speak to its specific results until it is released, the force structure our architecture describes is numerically similar the Navy’s, but it is based upon fundamentally differing notions of conventional deterrence and force posture. Simply growing the Navy and operating it as we do today will not be an effective response to renewed great power competition.

Too many large surface combatants. The executive summary released by the Navy announcing this assessment points to “…increased…expeditionary BMDBallistic Missile Defense]” requirements to justify the larger number of large surface combatants. There is an important “roles and missions” question at the heart of this discussion, and the defense of land-based expeditionary forces could, in many cases, be more efficiently be provided by land based Army air defense artillery, freeing up expensive multi-mission ships to pursue the numerous other naval missions required of them. Additionally, for the cost of 16 additional large surface combatants (at $2 billion each) approximately 40 smaller ships can be built (see below).

Too few small surface combatants. Everything worthwhile that the Navy does depends on sea control. Sea control requires a force to neutralize the surface, subsurface, and air threats to it where it wishes to operate. Put another way, the Navy cannot project power without sea control, and the ability of our great power competitors to deny us sea control is on the increase. More numerous, heavily armed and resilient SSC are critical to a credible conventional deterrent force capable of targeting and neutralizing adversary ships and submarines.

For an advocate of American seapower, there is much to like in this force structure assessment, but Congress and the American people will expect a thorough discussion of the strategic assumptions and narrative behind these numbers before the Navy can start “bending metal.” This 355-ship Navy will be considerably more expensive to acquire, train, man, and equip than the current 273 ship fleet, and given the readiness hole the Navy is already in, the expense of this plan could amount to an additional $40 billion annually (in 2016 dollars). The Navy is to be commended for at last thinking beyond the constraints of current budgets and stating what it needs to do its job within an acceptable margin of risk.

War on the Rocks

What Should the Navy’s Next Generation of Ships Look Like?

In an interview with Tom Temin on Federal Drive, Bryan Clark discusses the U.S. Navy’s next generation of ships. ...

The Look Ahead Series

The past year brought an array of challenges on domestic and global fronts: a once-in-a-century disruption caused by the coronavirus pandemic and subs...

Whoever is elected president in November will have to confront one of the most important economic and national-security issues of our time. And it’s...