“Confessions of a P&G Brand Manager,” a classic article published in July 1978 in Media Decisions magazine, described Procter & Gamble as “that mysterious and impregnable bastion of package goods power in Cincinnati.” Today the world’s largest advertiser is no longer mysterious about where it stands, and it’s using its considerable marketing power as a force for social change. That includes reducing the spread of Covid-19 and advancing racial equality. We need other companies to follow P&G’s example and lead on social issues.

With its “ Masks On “ campaign, P&G is filling a public safety void left by the U.S. government, which has failed to deliver a cohesive national message or public service announcements (PSAs) to reduce the spread of Covid-19. Missing is today’s version of memorable PSA campaigns such as “ Remember… Only YOU can prevent forest fires “ with Smokey the Bear; “ People start pollution. People can stop it “ featuring the tearful Native American actor Iron Eyes Cody; and “ Friends don’t let friends drive drunk. ”

The government’s silence on Covid-19 safety has only made us more confused and polarized.

Enter P&G. Under its “ Stepping up as a force for good ” mission, the company is using its marketing muscle to fill the void left by government to promote mask wearing and social distancing, as well as to advance the conversation on more controversial social issues. It’s an example of social impact leadership that must become widespread to move the needle on deep-seated societal problems.

Just this month, the company launched the “ Masks On” campaign in its home state of Ohio, using billboards and social media. Gov. Mike DeWine supported the effort with this tweet: 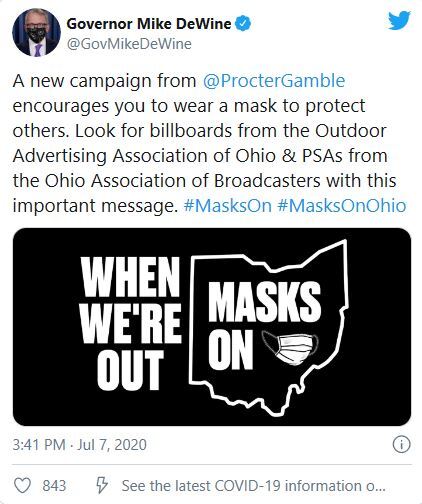 P&G has crafted bold positions on other social issues. In June it launched a new TV ad declaring “Now is the time to be anti-racist” and “Now is the time to take action.’‘ Titled “The Choice,’’ the ad encourages viewers “to come off the sidelines and get in the game for equality,’‘ Damon Jones, P&G’s Chief Communications Officer told a newspaper reporter.

Last Thursday, P&G announced that it will pursue natural climate solutions to accelerate progress on climate change and that it will make its operations carbon neutral for the decade. It also said it would reduce its greenhouse gas emissions by 50% and will purchase 100% renewable electricity for all its manufacturing sites by 2030. P&G is investing heavily in this commitment. It is doing so by working to protect fragile ecological regions; moving ahead on wind, solar and geothermal projects; and reducing the carbon footprint of its consumer products.

These efforts follow earlier brand forays into social matters. When women soccer players fought for equal pay, P&G’s Secret deodorant brand, a sponsor of the US Women’s National Soccer team, supported their cause and contributed more than $500,000 to the US Women’s National Team Players Association. A controversial ad for Gillette razors tackling “toxic masculinity” challenged men to stop harassing and bullying women. The ad asked, “Is this the best a man can get?” While the ad was controversial, 80% of consumers under 30 viewed it positively.

Unlike the company’s predecessors, P&G executives speak openly about their commitment to leverage the company’s vaunted standing in the business world. “We have a responsibility and an opportunity to use our voice,” said Carolyn Tastad, president of North American operations, in a CNN Business interview. Her role includes helping P&G meet its goals of gender pay equity and 50-50 representation of men and women at all levels of the company. Currently, 47% of P&G’s global employees and 40% of its executives are women.

They can no longer hide under their tortoise shells. Customers and employees expect companies to take stands on social issues, especially Millennials, who represent the largest generation and biggest part of the workforce. Some 82% say they want firms to make positive social impact.

Brands must stand for more than functional benefits. The 4 P’s of marketing – product, price, promotion and place – no longer meet the minimum ante for success. Brands more and more need to have a fifth P — purpose — that aligns with their consumers. Companies need to adopt social impact metrics and deliver more than their standard Corporate Social Responsibility (CSR) measures. Once they take up a social issue, they must show tangible progress in solving it.

The biggest advertisers must take on the role of driving positive social change. Government has failed in its role to protect public health. Large corporate advertisers need to fill this gap and they have the messaging skills and resources to do so. P&G spent an estimated $10 billion globally in advertising in 2018, and marketers across all organizations were projected to spend $254 billion in the U.S. for 2020 (pre-pandemic). It would serve the public, consumers and companies’ bottom lines well by earmarking hard marketing dollars to fix perpetual social wounds.

This is not the P&G portrayed in “Confessions.” It shows a company no longer isolated, taking a stand and leveraging its immense marketing arsenal for social good as well as for its growth and profitability. “Crises like Covid reveal the cracks in society – and we cannot let those inequalities widen. In fact, now is the time to accelerate efforts to address the significant inequalities that exist,” said Marc Pritchard, P&G’s chief brand officer.

To succeed in this game, other companies should take Pritchard’s words and P&G’s actions to heart.

Tom Keatinge, director of the Centre for Financial Crime and Security Studies at RUSI, joins Casey and Nate to discuss how the UK can elevate its figh...

Following is the full transcript of Making a Killing Ep 13 titled Olympics Special, Travis Tygart on Corruption and Doping in Sports ...

The FTC Shouldn't Be a Lawless Agency