To learn more from the authors on NGAD and its implications, watch the accompanying event titled Framing Next Generation Air Dominance Around Software for Operational Advantage

US air and naval forces face contested environments over wider areas than ever before. Opponents fighting near their home territory can use long-range surface-to-surface missiles and air defense systems—enabled by a combination of commercial or military satellites and airborne sensors—to threaten US or allied airfields, ships, and aircraft thousands of miles away, as depicted in Figure 1.1 By showing they can slow or prevent US intervention in their regions, aggressors like the People’s Republic of China (PRC), Russia, and Iran hope they can convince neighbors to accept their demands for access, influence, or territory. And if coercion proves unsuccessful, these revisionist powers could employ long-range precision weapons as part of a military offensive to achieve their objectives.

Although formidable, long-range weapon and sensor complexes like that of the PRC would not be impenetrable. For example, countermeasures and stealth capabilities could degrade the ability of enemy sensors to target and communicate the location of US ships or aircraft, and self-defense systems could prevent small attacks from being successful. As Figure 1 suggests, against the larger strikes likely to be mounted during war, US ships, aircraft, and bases could also be positioned farther from enemy missile batteries to shrink weapon salvos to within US units’ defensive capacities.3 However, reducing their detectability and attacking from longer ranges would reduce the number and intensity of effects US ships or aircraft could generate. Consequently, adversary leaders may have greater confidence in their ability to win a war on acceptable terms. 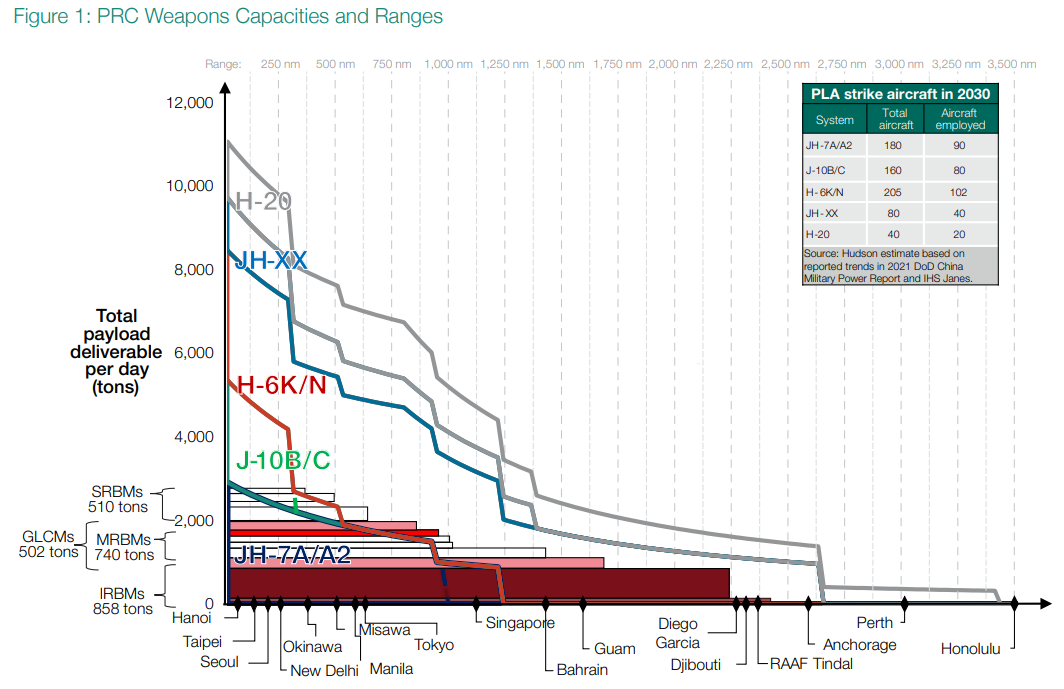 Source: The authors based on data and information gathered previously by others.2

PRC, Russian, and Iranian anti-access capabilities also enable “gray zone” aggression. Effectively confronting these sub-conventional operations requires small US units or groups that allies and partners in the region would not view as disproportionate or overly provocative.4 To be credible, however, US forces intent on countering gray-zone aggression should also be survivable enough to avoid being easy targets of a preemptive attack by long-range sensors and weapons. As a result, US force packages generally are too large and well-defended to proportionally counter gray-zone operations, surrendering rungs on the escalation ladder to an opponent.5

The intent of the U.S. Air Force’s and Navy’s Next-Generation Air Dominance (NGAD) programs is to counter the impact of adversary sensor and weapon networks by allowing US air forces to operate against more challenging threats and at longer distances from airfields or aircraft carriers, aims NGAD would accomplish by replacing today’s front-line fighters with a combination of manned and unmanned systems centered on a new, sixth-generation manned aircraft.6 Operationally, the NGAD programs would use unmanned systems to degrade adversary sensors and communications, find enemy forces, and attack targets. Manned NGAD aircraft would manage the actions of unmanned systems and deliver effects when needed because of their greater capacity or ability for more direct operator control.7

The services’ NGAD plans will present a challenge to the Department of Defense’s (DoD) acquisition processes and management structures, which are designed to define, buy, test, and operate discrete platforms or equipment and do not easily accommodate development of recomposable systems of systems (SoS).8 In light of past SoS failures, including the Army’s Future Combat System (FCS) and Navy’s Littoral Combat Ship (LCS) program, Navy and Air Force leaders tend to emphasize NGAD’s new manned fighters while de-emphasizing the broad family of systems that would also contribute to their respective NGAD programs.9

While an aircraft with greater reach and survivability would clearly be useful in the face of improving air defenses and longer range ballistic or cruise missiles, focusing Air Force or Navy NGAD programs on their manned components would be unlikely to deliver more than an incrementally improved version of today’s fighters. As counter-air sensors and missiles are easier and less expensive to advance than manned aircraft, whatever edge manned NGAD aircraft might provide would be fleeting and evolving them to stay ahead of adversaries would likely be unaffordable and late-to-need.10 Sustaining the survivability, reach, and lethality required from the DoD’s NGAD program will depend on an array of offboard systems that can independently change and evolve to exploit emerging technologies and avoid presenting opponents with predictable formations and capabilities.

Despite the limited speed of advancement and possible high cost associated with new manned fighters, the Air Force and Navy still need to replace aging F-22s and F/A-18 E/Fs, and automation has not yet matured sufficiently for unmanned aircraft to conduct the full range of air warfare in highly contested environments. The services’ NGAD programs will therefore need to develop afford able manned aircraft alongside a recomposable set of organic and offboard sensors, weapons, computer processors, and unmanned vehicles.

To achieve the agility required to counter evolving threats, Navy and Air Force leaders will need to focus their NGAD programs first on software and mission systems and second on manned and unmanned platforms, a departure from historical DoD acquisition practice. NGAD could thus pioneer a new method for military SoS development, which this report describes in the context of the Air Force NGAD program. Prioritizing NGAD’s software ecosystem and using it to integrate the program’s elements could yield a capability able to respond to an opponent’s actions and create surprises that dissuade adversary aggression, which is ultimately the objective of US force development efforts.

Transcript: Defense Disruptors Series: General CQ Brown and the Future of the US Air Force