The Quantum Space Race Is Here 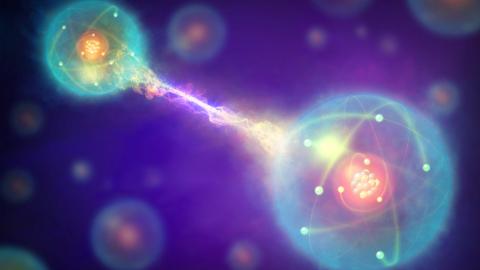 A quantum satellite uses photons that are inextricably linked or “entangled” by quantum physics, to communicate with a ground station. The quantum-entangled link allows for the teleportation of information at the speed of light, but also means that any attempt to intercept the signal immediately severs the link, making hacking impossible. Quantum communication satellites will become hubs of not only a future quantum internet, but hubs for hack-proof networks for transfer of classified data and communications—not to mention a command-and-control architecture that will be an integral part of space domain dominance.

Last month the European Space Agency announced a plan for a consortium of 20 companies to launch a quantum satellite in 2024. The satellite will be using quantum key distribution (QKD) technology. i.e. exchanging encryption keys only known between shared parties. for European quantum-secure communications networks. The satellite will fly in low earth orbit (LEO) and will be connected to an operations center based in Luxembourg.

Back in February the Singapore-based aerospace company SpeQtral also announced it will be launching its first QKD satellite, SpeQtral-1, in 2024 with the help of Singapore’s Office for Space Technology and Industry, and the French aerospace company Thales. Not waiting to be outdone in this regard, Virgin Orbit has partnered with UK company Arqit Quantum for no less than five launches of LEO QKD satellites, beginning in 2023. Interestingly, these launches would serve potential government customers with Arqit’s “Federated Quantum System,” which is currently available only to Five Eyes nations’ defense departments.

QKD is a proven technology: companies like IDQuantique in Switzerland and QLabs in Australia have been providing quantum encryption for customers for years (full disclosure: both are charter members of Hudson Institute’s Quantum Alliance Initiative). Deploying that technology in space is trickier, and all these satellite projects will be experiments—at least at first. But it was China that launched the first quantum satellite in 2016, dubbed Micius, and a year later used it to establish how to achieve long-distance QKD communication between ground stations set more than 1200 km apart. In July China sent up a second quantum-encrypting satellite, that is reportedly one-sixth the mass of its 2016 predecessor.

All these are steps toward creating a constellation of quantum-encryption-compatible satellites across a range of orbits, conveying long-distance communications that are unhackable and opaque to those not privy to the quantum key.

So where is the US in all this? Strangely, even though the first-ever QKD network was created by the Defense Advanced Research Projects Agency in 2003, our government and especially our National Security Agency have been largely incurious about the possibilities of entanglement-based communication and QKD, while suggesting the Chinese interest in the technology has been a waste of time and money. Recently the Air Force Research Lab has funded research on using drones for quantum-entangled networks, but those who oversee these efforts don’t see how using a quantum technology that only works when satellite and ground station are in perfect alignment, marks much improvement on current systems.

Although the US CHIPS and Science Act of 2022, signed by President Biden in August, allocates more than $153 million a year for quantum computing and networks, it’s not likely to encourage more work toward QKD-based systems in the sky.

That attitude may have to change, however, if the Chinese and Europeans are able to demonstrate how to create a true QKD-based network using multiple satellites connected to multiple ground stations—a network beyond the reach of even the most sophisticated hacker.

All things considered, if the US is going to enter the quantum satellite race, it’s unlikely to do so on its own. Instead, those who would like to see America take advantage of this emerging technological matchup will need to encourage a foreign partner to step up and offer to help motivate our scientists, engineers, and eventually the government to take this next great quantum leap, this time into the realm of space.