Biden’s Nuclear Posture Review Is Not Stoking an Arms Race

One could assume that the “arms race” contention is simply a throw-away line, especially since the US strategic nuclear arsenal fits within the confines of the New START agreement. 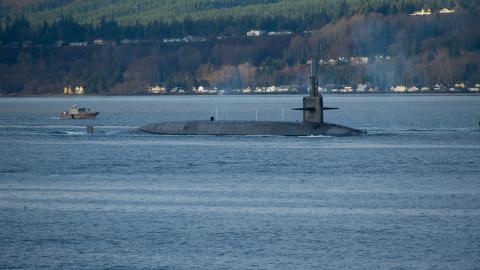 Caption
The Ohio-class ballistic missile submarine USS Nevada departs its homeport of Naval Base Kitsap-Bangor, Washington, for a scheduled patrol on December 16, 2021. (US Navy Photo by Ian Zagrocki)

The surprise was not that the United States’ two nuclear-armed adversaries were quick to reach for their default criticism of US nuclear policy, but that dominant US media organizations, such as Forbes magazine and the New York Times, and disarmament advocates such as Daryl Kimball (of the Arms Control Association) and Joe Cirincione (formerly of Ploughshares) piled on, castigating the NPR for sustaining a “risky status quo” via a “flawed, inadequate, and dangerous” process.

The NPR simply outlines that the United States is moving to provide a new Columbia-class submarine, the Sentinel intercontinental ballistic missile (ICBM), and the B-21 strategic bomber to replace, not increase, our legacy systems. The legacy (1986) D-5 missile for the submarine is getting an extension and the bomber force will be getting a new cruise missile—the long-range strike option—which was last built in 1982. Both are replacements, not additions to the force.

All of these weapons are completely consistent and compliant with the 2010 New START nuclear arms treaty, within both the 700 strategic nuclear delivery vehicles (SNDVs) and the 1,550 warheads allowed.

These new systems are scheduled to begin deployment no later than 2029 with the completion of the force of twelve subs, 400 ICBMs, and 100 bombers by 2042. Russia has already designed and deployed up to five new strategic nuclear weapons systems it asserts do not come under the New START Treaty limits, while China’s nuclear forces are not subject to any treaty limits.

To characterize the US modernization as starting an “arms race” means the 2010 New START Treaty is not controlling arms but actually perpetuating an arms race. If that’s the case, why did nuclear disarmament advocates praise the Biden administration’s promise to rapidly extend the treaty’s duration as soon as President Joe Biden took office? It is equally ludicrous to assert Russia would also agree to extend the New START Treaty for five years if the treaty would allow the United States to speed ahead building nuclear arms at an alarming rate.

This is not a small debating point. Nor can it be explained by China, Russia, and US disarmament advocates simply engaging in what could be considered normal exaggeration for political purposes—accusing the other guy of bad faith and engaging in destabilizing arms racing. This may indeed be routine rhetoric, as little solid evidence is given to make the “arms race” case. Instead, one could assume that the “arms race” contention is simply a throw-away line, especially since the US strategic nuclear arsenal fits within the confines of the New START agreement.

Disarmament groups in the United States should not be parallel fiction writers along with the scribes at TASS and China Daily. Disarmament advocates have long sought to unilaterally eliminate US nuclear weapons programs, irrespective of whether Russia or China has already built and deployed dozens of new nuclear systems. Just this past summer, disarmament advocates got a number of House members to propose to unilaterally kill the Sentinel ICBM program. The amendments on the House floor lost with 309 “No” votes in opposition, an unprecedented three-to-one slam dunk drubbing.

The House apparently agreed that the disarmament advocates didn’t produce the facts. The only arms race going on is the Chinese and Russian build-up. But nuclear critics apparently are allergic to accurately describing Russian and Chinese long-range or strategic nuclear programs, which now consist of a combined sixty new types of nuclear weapons systems including cruise missiles, strategic bombers, fixed and silo-based ICBMs, a number of strategic nuclear submarines, as well as different submarine-launched ballistic missile systems.

Most of these Russian (89 percent) and Chinese systems are currently deployed or in the process of being deployed. The Chinese deployments will by 2029-35 be nearly complete according to Rick Fisher of the Strategic Assessment Center. On top of this, 55 percent of Russian and 100 percent of Chinese nuclear systems are not under arms control limits, compared to 20 percent of US forces.

These adversary deployments precede US deployments by many years and were planned and developed decades ago, long before the United States agreed to its current modernization program in a 2010 deal between the Obama administration and Congress.

The common propaganda used by both governments and US disarmament groups regarding “arms racing” has another important dimension. It is also a staple of the US media, routinely being used to describe US deployment and acquisition decisions. David Sanger and William Broad of the New York Times, for example, called the nuclear plans described by the 2018 NPR as starting a dangerous and unnecessary arms race while the 2022 NPR plan was described as authorizing the first use of nuclear weapons and, as disarmament advocate Stephen Young argued, “increasing nuclear risk.”

Sanger and Broad also blame US nuclear weapons acquisition on the “Pentagon,” as if the White House has no role in the DoD budget, and “furious lobbying” by the aerospace industry, as if the industry pushing plans supported by the past three administrations is somehow underhanded.

As for the Chinese and Russian regime disinformation specialists, they now claim the United States is pursuing an arms race for the purpose of achieving “military superiority” and becoming the world’s only hegemon, a bully able to use its nuclear arsenal to “dominate” and push other countries around, risking war.

The disarmament community echoes these claims: the United States is irrationally seeking such nukes to exercise “global superiority,” or adopting a policy of bringing America closer to nuclear war.

So far, Congress has resisted the siren claims to move toward unilateral disarmament as have the past three administrations. The United States must fully fund the deployment of the planned nuclear deterrent to maintain and sustain US nuclear security and continually knock down the thread-bare disarmament arguments. The only alternative is obsolescence, putting the United States out of the nuclear deterrent business, and leaving the homeland vulnerable.