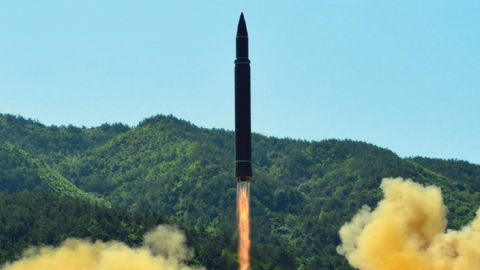 Caption
The allegedly successful test-fire of the North Korean intercontinental ballistic missile Hwasong-14 at an undisclosed location on July 4, 2017. (STR/AFP via Getty Images)

Arms control has been a feature of the U.S.-Russia nuclear balance now for the past half century, starting with the SALT agreements in 1972 and then the START agreements in 1991. For the United States, it has undertaken two cycles of nuclear modernization and is now on the third. The Eisenhower, Kennedy, and Johnson administrations built the first triad of Minuteman missiles, B-52 bombers, and Polaris submarines, a force that President John F. Kennedy twice cited as the key reason the United States beat back deadly serious nuclear threats over Berlin in 1961 and Cuba in 1962.

The second nuclear triad modernization started in the 1970s, but with many delays and funding shortfalls. It only gained significant momentum during the Reagan administration, which built the Peacekeeper land-based missile, the B-1 and B-2 bombers and their associated cruise missiles, and the Ohio-class submarine with its associated C-4 and D-5 missiles. Each of the major platforms— the PK, the Ohio, and the B-2 —were stopped in the 1990s, coincidental with the assumed end of both the Cold War and the Soviet empire and the implementation of the START I arms control treaty.

The third modernization of the nuclear triad will bear fruit around 2029 with the deployment of the first land-based missiles, followed within two years of both the nuclear-capable B-21 Raider stealth bomber and the Columbia-class submarine, the result of nearly twenty years of concerted development and modernization that started with a December 2010 bipartisan agreement between the U.S. Senate and Obama administration.

Not only does this modernized deterrent prevent the United States from being attacked with nuclear weapons, but it is also designed to serve as an umbrella over America’s allies and friends, most notably in NATO and in the western Pacific. The umbrella provides a nuclear backstop to stop any major military attacks, especially from nuclear-armed Russia, China, or North Korea. Our allies thus need not build their own nuclear deterrent, therefore helping to prevent the proliferation of such weapons, and lessening the dangers of nuclear conflict.

In 1963, Kennedy spoke at American University and warned of the potential for multiple new nuclear powers to emerge unless the atmospheric testing of nuclear weapons was stopped; he later struck an agreement in July 1963 with the Soviets called the Limited Test Ban Treaty. Subsequently, a Comprehensive Test Ban Treaty was agreed to by most of the world’s nuclear powers to ban even underground tests, but the United States did not sign on. Washington has not tested a nuclear device since 1992.

During the entire nuclear age, even after China exploded its first nuclear device in 1964, it was assumed that the nuclear powers had no interest in seeing more countries build nuclear weapons. That was the adopted narrative for decades, with the dominant view being that China was strongly against proliferation, desired an arsenal of only a few hundred warheads, committed to not using nuclear weapons first, and would always keep its weapons off of alert and stored separately from its missiles—all under an overarching “minimal nuclear deterrent” posture despite the United States and Russia building nuclear arsenals with tens of thousands of warheads and bombs.

This narrative held for many decades. Although the United States and Russia now maintain long-range nuclear arsenals at or near 2,000 warheads, over time both nations reduced their medium-range nuclear-armed missiles and strategic or long-range treaty accountable deployed nuclear weapons by nearly 90 percent under the Intermediate-Range Nuclear Forces and START series of agreements without securing any Chinese buy-in.

Luckily, the only member of the Nuclear Non-Proliferation Treaty (NPT) that went nuclear after the end of the Cold War has been North Korea, albeit with current fears that Iran might also join the club of rogue nuclear actors (the only other non-NPT members India and Pakistan both exploded weapons for the first time in 1974 and 1998, respectively). Thus, were Kennedy’s fears as stated in his 1963 AU speech overblown?

Not at all, concludes Tom Reed. In his 2009 book, The Nuclear Express, the retired former secretary of the U.S. Air Force and deputy national security adviser to President Ronald Reagan, offered a prescient warning that despite the end of the Cold War and major reductions in Russian and U.S. nuclear weapons, the “other” nuclear power—China—was anything but the peaceful international actor it portrayed itself as. And now with an acknowledgment that China is building some 360 new missile silos capable of deploying over 3,000 warheads, Beijing’s proliferation record is being re-examined.

Although written more than a decade ago, Reed’s warnings about China are now highly relevant. Reed explained that China was a major proliferator of nuclear weapons technology, having created what one might term the Pakistani AQ Khan “Nukes R Us” entity that not only built the Pakistani atomic weapon but in deliberate fashion helped construct a nuclear weapons program for North Korea, Libya, Iran, and Iraq.

Reed explained that in 1982, Deng Xiaoping told a secret group of members of the Politburo that China would actively help its friends build nuclear weapons, and with such proliferation insulate China’s revolutionary activity from pushback. The Khan network was created in Pakistan where Khan, the builder of Pakistan’s first nuclear weapon, worked tirelessly to sell nuclear weapons technology to a series of rogue nations.

North Korea was one successful proliferator, and Pyongyang then helped Pakistan build the ballistic missiles with which to deliver its own weapons. Centrifuges designed by Pakistan and manufactured in Malaysia were later interdicted at sea by Italian Navy forces—preventing them from reaching Libya in 2006—leading to the creation of the American Proliferation Security Initiative that Ambassador Robert Joseph explained took down not only the Libyan nuclear capability but gave the United States and its allies a framework with which to stop more proliferation.

Iraq’s nuclear capability was earlier discovered purely by luck, as the liberation of Kuwait led the U.S. coalition to discover that Iraq was just months away from having a nuclear warhead, a nuclear capability long thought dead because of the Israeli “Operation Opera” bombing of the Osirak nuclear reactor in Iraq in 1981 and the subterfuge Saddam used to fool inspectors from the International Atomic Energy Agency. Subsequent to the liberation of Kuwait, top UN officials Ambassadors Rolf Ekeus and Richard Butler, responsible for a decade-long inspection of Iraqi weapons of mass destruction mischief, both were surprised by what Saddam had achieved and would repeatedly warn that if Saddam remained in power, he would eventually build another nuclear weapons capability.

Despite U.S. efforts through the Agreed Framework deal of 1994 and the Six-Party Talks started by the George W. Bush administration, no deal to denuclearize North Korea was struck. Commentary often excused North Korea’s behavior, as well as Iraqi and Libyan efforts to build nuclear weapons by asserting these countries had to defend themselves from U.S. aggression, as Iraq (1991 and 2003), Libya (2012), and North Korea (2017) were all attacked or threatened with attack by the United States.

The narrative, especially from the arms control community, further assumed that Libya and Iraq were attacked due to their lack of nuclear arms, while North Korea’s nuclear force prevented any U.S. aggression against the Democratic People’s Republic of Korea (DPRK), especially during the Trump administration.

But the recent revelation by former Secretary of State Michael Pompeo that China actively opposed North Korean denuclearization is consistent with Tom Reed’s history of China’s pro-proliferation activity. It is also consistent with China’s push to militarize not only the South China Sea but also its drive to eliminate as much U.S. military capability in the region as possible.

Chinese efforts to assist North Korean nuclear proliferation were designed to force a split between the United States and South Korea. Indeed, a number of analysts have argued that given the increased chances of a nuclear-armed conflict on the Korean Peninsula—which would imperil the U.S. homeland—the United States should withdraw all its forces from the peninsula and avoid having to trade Los Angeles for Seoul, for example, at the outbreak of war.

The Chinese strategy has thankfully not worked—yet—as the South Korean population by upwards of 70 percent supports a stronger U.S.-Republic of Korea (ROK) alliance despite domestic U.S. pressure to disengage and some ROK entities pushing for greater cooperation with the DPRK, especially under the previous South Korean president. China’s strategy may also further backfire, as a large majority of the South Korean population now supports the ROK securing its own nuclear deterrent while sentiment in Japan has moved considerably in the pro-nuclear direction—especially should it involve the stationing of U.S. and not Japanese nuclear deterrent forces in Japan.

When combined with evidence that China is building some 360 intercontinental ballistic missiles (ICBM) silos in western China at a rate that at least matches and may exceed the 130-160 silos per year rate at which the United States deployed the Minuteman I and Minuteman II ICBMs between 1962-66, it is clear that China believes that nuclear weapons are convenient tools of statecraft, to be used for coercion and blackmail, and that the days of China’s “minimal deterrence” and “peaceful rise” are long past.

Legislation introduced in Congress on July 13 to amend the defense bill called for a declaration that China is in violation of its commitments under the 1969 Nuclear Non-Proliferation Treaty, has failed to pursue arms control of its own nuclear weapons, and has aggressively pushed proliferation of nuclear weapons to its law-breaking rogue state friends.

Finding China in violation of its nuclear NPT responsibilities may be the first step in revealing China’s true nuclear recklessness and curtailing further proliferation. Unfortunately, as Seung-Whan Choi of the University of Illinois at Chicago believes, the growing Chinese-induced nuclear threat may not be curtailed, and thus U.S. allies in the western Pacific, most notably Japan and the Republic of Korea, may have to go nuclear to defend themselves.

That is the very nightmare about which President Kennedy warned in 1962.

Read in The National Interest