Experimental Diplomacy with North Korea Appears Over and Done 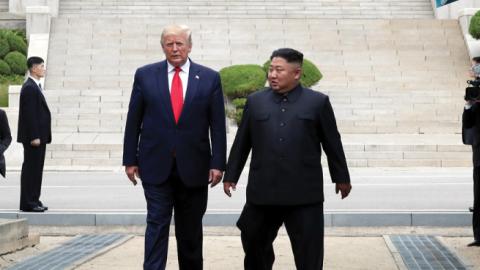 The original version of this op-ed, which originally appeared in Korean, can be viewed on the DongA Ilbo website.

p(firstLetter). A two-year period of experimental diplomacy with North Korea appears over and done. Four results appear uncontestable. First, nuclear weapons deter hot but not cold wars. Second, summit meetings are no substitute for routine diplomacy. Third, the next generation of North Korean elite must lower their expectations for a bright future. And fourth, Seoul and Washington need to refocus on preserving a prosperous and robust alliance.

Since January 2018, there has been an unprecedented depth of political will favoring diplomatic engagement among the United States and the two Koreas. But this unusual 24-month hiatus in longstanding tensions concluded earlier this month as North Korea continued to escalate its ascending rhetoric and missile launches. There is scant momentum to preserve unconditional diplomacy into and through 2020. As with several other diplomatic overtures over the past three decades, another concerted attempt to bring North Korea into the community of sovereign states and international economics appears to have failed.

First, the real value of nuclear weapons lies in preventing war, not waging it. Nuclear weapons hold back governments from igniting a war with nuclear-armed opponents. This reality helps to explain both why Pyongyang seems preternaturally disposed toward building up a nuclear arsenal, as well as why peace with North Korea is so elusive. The United States, backed by United Nations Security Council resolutions, demands the denuclearization of North Korea. Unfortunately, none of the concessions nominally offered by the Kim regime would eliminate, reduce, or even halt nuclear weapons development in North Korea.

Kim Jong Un was never prepared or able to deliver on a promise of working toward serious denuclearization. Likewise, President Donald Trump could never provide sufficient rewards, especially significant sanctions relief, that appeared to be Kim’s asking price for even modest steps.

So, Kim has reverted to classical form, with ballistic missiles, brinkmanship, and braggadocio passing for North Korean strategy. But Kim can never shoot his way to better economic and political development for the North Korean people. And the strength of a growing arsenal of weapons of mass destruction and an array of missiles turns out to be the ultimate paper tiger, one which is allowed to roar on paper but would bring about regime destruction should any be used in battle.

Innovation in new domains may eventually render nuclear deterrence anachronistic. But for the time being, at least, there remains an enduring value in stockpiling mass-destruction weapons, despite the improbability of being able to use them.

__Second, leaders’ meetings require the essential scaffolding of sturdy diplomacy. An ice-breaker summit was an acceptable risk, but a second summit should have awaited a fair deal negotiated in advance by lower-level officials. The absence of progress would have amply demonstrated the Kim regime’s insincerity without the pretense of a common agenda with President Trump.__

In early 2018, President Trump was right to support President Moon’s peacemaking initiative and take a chance on an impromptu summit in Singapore in June of last year. The problem was not in having the leader of the United States, and the leader of North Korea set out a four-part of aspirational agenda. The problem was in selling the program as a genuine breakthrough and the lack of follow-through.

In retrospect, the Singapore leaders’ meeting broke the surface ice, but not the gigantic icebergs of conflicting interests floating underneath. Meanwhile, the Hanoi summit should have sent a clear signal that Kim and Trump remained worlds apart. The execution of diplomacy has been uneven at best, with summit meetings and overblown rhetoric offering an illusion of accord.

__Third, the next generation of North Korean elite must lower their expectations for a long struggle that will leave them, at best, akin to a nuclear-armed Cambodia rather than on the path toward becoming a modern society and advanced economy like the Republic of Korea.__

The bright future President Trump offered Kim Jong Un, who seemed to wish to bring wealth to at least peers among the country’s elite, will now have to be replaced by an alternative scenario. That might be trying to close ranks with China, even though the cost of losing strategic autonomy will directly conflict with the political goals of the Kim regime. Indeed, continuing to grow the illicit economy in cyberspace will be part of the plan. However, Kim can have a strong economy or a significant nuclear-armed missile arsenal, but not both.

__Fourth and finally, Seoul and Washington need to return their focus to preserving a robust and prosperous alliance, not a futile attempt at talking a dictatorship out of power.__

A Republican President of the United States supported a liberal South Korean president with a unidimensional agenda aimed at terminating the long cold war and separation with North Korea. Despite his relative youth and some foreign education as a child, however, Kim Jong Un is no more prepared to tinker with the power of the Kim family dynasty than was his father or grandfather.

President Moon Jae-in needs to pivot from striving for inter-Korean peace by all means as his legacy-seeking goal to the more limited objective of preserving stability and showcasing the economic, political, and military potential of the Republic of Korea.

The reasons for engaging North Korea have been sound. First, it is plausible that all things being equal, Kim might want to trade in some of his weapons programs in exchange for economic development and a reduction in the capabilities of outside powers. Second, America’s ally under the Moon administration has been dedicated to peace and improving inter-Korean relations. Third, the Trump administration would like to reduce the security burdens for dealing with North Korea to better focus on becoming more competitive for dealing with resurgent major-power competition. Alas, none of these reasons matter as much as the Kim regime’s willingness or ability to make a reasonable deal with substantial steps toward denuclearization.

The original version of this op-ed, which originally appeared in Korean, can be viewed on the DongA Ilbo website.