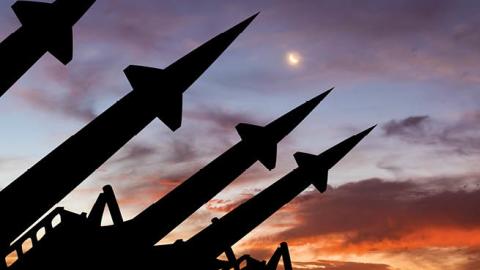 Russia’s nuclear saber-rattling directed at NATO while it continues its war against Ukraine has brought nuclear weapons back into public consciousness. Tom Nichols, author of the Death of Expertise, recounts in an Atlantic essay that since the end of the Cold War, nuclear weapons illiteracy has grown. Then Nichols inadvertently provides a lesson on just how pervasive misinformation on the subject is by proceeding to misinform the public. He states, “By treaty, Washington and Moscow have limited themselves to 1,550 [nuclear] warheads apiece. The basic idea is that these numbers deny either side the ability to take out the other’s arsenal in a first strike, while still preserving the ability to destroy at least 150 urban centers in each country. This, in the world of nuclear weapons, is progress.” That is completely wrong.

Americans should know that our government does not target urban centers as such with any weapon, let alone nuclear weapons—and this has been true for decades. The Kennedy administration explicitly proffered a “no-cities” approach. Each subsequent administration has done the same, including, for example, President Nixon’s “Policy Guidance for the Employment of Nuclear Weapons,” President Carter’s Presidential Directive-59, up to the most recent 2020 Nuclear Employment Strategy.

Intentionally targeting noncombatants runs afoul of the laws of war, which our Pentagon abides by, and brings scandal and scorn upon itself when it errs. Instead, the United States practices counterforce targeting— that is, targeting the adversary’s military and military-supporting capabilities. Abiding by the laws of war is not only moral and ethical because it seeks to protect the politically innocent and minimize harm to them, it also increases the credibility of our deterrent. This is because the United States seeks to deter adversaries from attacking U.S. vital interests and precipitating a large-scale war by holding at risk the adversaries’ means of continued escalation. If deterrence fails, the United States has sought to maintain a spectrum of tailored options that will give U.S. decision-makers maximum options to increase their chances of terminating the conflict at the lowest levels of damage feasible and on terms most favorable to the United States.

While Americans have enjoyed the relative global peace for nearly 40 years—generally unaware of the size and scope of nuclear dangers to the homeland except for the occasional news snippet about North Korea’s latest nuclear or missile test, or Iran’s threats to get the bomb—commentators and prominent former officials have, like Nichols did here, confused the public about U.S. deterrent strategy. Even the most senior U.S. defense officials are not immune, with Clinton-era Secretary of Defense William Perry recently writing that one U.S. submarine carries enough nuclear weapons “to place two thermonuclear warheads on each of Russia’s fifty largest cities,” even though they do no such thing.

After the Cold War ended, nuclear illiteracy grew—even among those who should know better—because of the prevailing attitude that America could safely be done with nuclear issues, but nuclear issues were not done with us. Even as American defense officials focused on the war on terror, Pentagon strategists sought to craft U.S. nuclear policy to guide U.S. leadership in thinking about the unthinkable: a major war between nuclear weapons states. This continued even when elected leaders like President Barack Obama sought to subordinate deterrence to the goal of nuclear nonproliferation, which likeminded policymakers and commentators believed could reduce nuclear dangers if the United States deferred nuclear modernization or other means of improving U.S. nuclear weapons. This thinking was based on faulty assumptions about the nature of the global environment trending in a more benign direction and the impact of U.S. nuclear reductions as a prompt for other countries to also reduce their nuclear weapons. The 2010 Obama nuclear policy document even stated that “Russia is not an enemy.”

Yet the harsh international reality since 2010 has shattered idealist notions about the global peace, laid bare faulty assumptions, and brought U.S. nuclear strategy back into vogue. The 2014 and 2022 Russian invasions of Ukraine, nuclear weapons investments, nuclear threats, and violations of arms control agreements, combined with the “breathtaking” expansion of the Chinese nuclear arsenal while President Xi more brazenly awakens the Chinese Communist Party’s aims to subjugate democratic Taiwan, has made expertise in nuclear deterrence a major prize–even if many officials are playing catch-up with a subject.

It is regrettable Americans must refamiliarize themselves with nuclear threats, and the strategies needed to respond to those threats, but even more dangerous than an uninformed populace is a misinformed populace.

We are concerned a growing chorus of commentators will disparage the call to adapt and improve U.S. nuclear deterrence, and denigrate it as a Cold War obsession. But the U.S. government projects that over the next decade China will nearly quadruple its current force to 1,000 nuclear warheads while Russia, hampered by its conventional military’s poor performance in Ukraine, could rely more heavily on its growing stockpile of “warfighting” non-strategic nuclear weapons. As these threats grow in number, U.S. capabilities to hold these adversary systems at risk will also need to grow beyond what was envisioned back in the more benign threat environment of 2010, when the requirements for the U.S. nuclear arsenal were last set.

Those devoted to reducing the size and scope of the U.S. nuclear arsenal will promise that deterrence will work just as well if the United States simply relaxes its counterforce standard; but such claims are hubristic, unfounded, make no provision for deterrence failure, and, if implemented, would likely kill more civilians.

A nuclear weapon has not been used in war for 77 years, and it is imperative that nuclear strategists, policymakers, and the American people, support strengthening the credibility of the U.S. nuclear deterrent. This means the deterrent we inherited from the Cold War era must be adapted and improved in important ways to meet the challenges of a vastly more complex nuclear weapons threat landscape. Russia’s invasion of Ukraine has once again shocked policymakers across Western capitals, who were convinced that Russia simply would not do it. We must reexamine our assumptions and consider the possibility that our adversaries might have aspirations and risk calculations very different from what we think they ought to be. Then, with determination and bipartisan cooperation, we must seek to convince those adversaries that we are willing and able to thwart their aims, and in doing so, we can keep the peace.

Read in The Dispatch