The Navy Should Assemble a Fleet for Littoral Campaigns 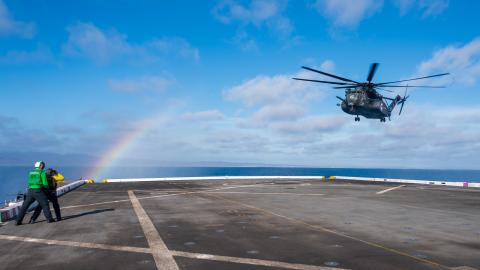 U.S. Marines are using this year’s Rim of the Pacific exercise to practice with allies the tactics they would use to disrupt Beijing’s war planning, as part of a long-term campaign to dissuade Chinese aggression. But Navy leaders are lukewarm on the value of day-to-day actions like those by Marine Littoral Regiments; they argue that the Navy cannot afford a robust peacetime presence while also building a fleet than can win a future war against China. This is a false choice built on the assumption that deterrence will fail. To prevent war with China, the Navy needs to contest Beijing’s bullying as it happens, rather than going all-in on a goal-line stand at the Taiwan Strait.

Campaigning, one of the new National Defense Strategy’s main lines of effort, is the bread and butter of maritime services. By sowing uncertainty about U.S. forces’ disposition and intent, strengthening interoperability with allies and partners, and contesting an adversary’s hybrid (or gray-zone) actions, campaigning can help dissuade aggression. And while it can include open-ocean exercises and deployments, campaigning mostly happens in the littorals, the area within a few hundred miles of shore where ships, ground troops, aircraft—and their weapons—can interact.

But the Navy is looking to shrink the fleet it built for these kind of operations. Its 2023 shipbuilding plan would retire a quarter of its Littoral Combat Ships, four dock landing ships, and two expeditionary support docks while also ending production of amphibious transport docks (LPD). Congress is moving to partly reject the Navy’s retirements and may add medical and salvage ships to this year’s appropriations.

There is a better way. Even without Congressional plus-ups, the Navy could assemble a more capable littoral fleet with a modest reduction in spending on high-end warships. Rebalancing the Navy’s risk profile makes sense considering China’s size, military modernization, and proximity. The Navy could increase by 50 percent its spending on destroyers, carriers, and submarines and still not substantially improve its ability to deny an invasion of Taiwan. However, spending a fraction of that amount on littoral ships, sailors, and sustainment could enable a campaign to reduce Beijing’s confidence in its plans and better prepare U.S. naval forces for the other scenarios China could present, such as a protracted blockade or quarantine of Taiwan.

For example, the Navy could realize a return on its more-than-$10 billion investment in LCS by basing most of the remaining hulls overseas, where they have proven themselves against Beijing’s gray-zone aggression. If the Navy eventually succeeds in retiring all but six of its Freedom-class LCS, most or all should be placed in Bahrain to replace soon-to-be decommissioned minesweepers and patrol craft. Of the 12 to 18 Independence-class LCS ships likely to remain in the fleet, half should be stationed in Japan and Singapore. In both cases, this forward-basing will reduce the stress on these ships’ fragile propulsion plants or hulls and reduce operating costs.

Undermining the confidence of Chinese leaders in their plans will require naval forces to use maneuver, reconnaissance, and counter-reconnaissance during peacetime to create more wartime options for U.S. and allied commanders and reduce those for China’s military. The Marine Corps plans to conduct these operations using Stand-In Forces postured across islands of the Philippines, Japan, and perhaps even Taiwan. Using MQ-9A Reaper drones, G/ATOR radars, Naval Strike Missiles, and short-range air defenses, Stand-In Forces could threaten Chinese freedom of movement across the First Island Chain and offer commanders a wide range of effect chains to create uncertainty for Beijing’s planners.

Sustaining and maneuvering Stand-In Forces will require ships that can operate in the shallow littoral environment and connect Marines ashore with the fleet at sea. The proposed Light Amphibious Warship, or LAW, is intended to fill this role but was delayed in the 2023 budget and may never come.

Instead of investing substantial money and time in the LAW, the Navy and Marine Corps should use existing vessels such as LCS and expeditionary fast transports to fill this niche while focusing on their next amphibious ship, the L(X). In addition to supporting Stand-In Forces across the First Island Chain, littoral vessels carrying Marine missile launchers and electronic warfare systems on their flight decks could be potent mobile anti-ship and anti-air platforms.

The Congress is likely to fund an additional San Antonio-class LPD in fiscal 2023, giving Navy and Marine Corps leaders a window to move ahead on L(X). The size and draft of LPDs reduces their utility maneuvering troops and weapons across littoral areas, but LCS and EPF lack the capacity and well decks needed along coastlines without piers or wharves. L(X) could bridge this gap by combining the logistical ease of an amphibious ship with the weapons and command and control of a littoral warship.

The behavior of China’s maritime forces demonstrates Beijing’s intent to dominate the Western Pacific and destabilize U.S. alliances. Optimizing the U.S. Navy to fight an invasion of Taiwan will not resist China’s efforts today and may only leave the U.S. and its allies more vulnerable to other scenarios for Chinese aggression. Investing a fraction of the Navy’s budget in a fleet that can campaign would expand the options available to U.S. commanders, increasing uncertainty for Chinese planners and reassuring allies and partners now falling prey to Beijing’s predations.