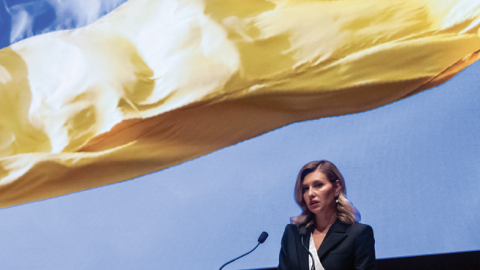 Caption
Ukrainian First Lady Olena Zelenska speaks to members of the US Congress in the US Capitol Visitors Center Auditorium on July 20, 2022, in Washington, DC, about Russia's invasion of Ukraine. (Photo by Saul Loeb-Pool/Getty Images)

Volodymyr Zelensky looks like a warrior, ready and able to defend hearth and home if we will only send him the weapons to do it. He well articulates Russia’s assault, the meaning of the war for Europe and NATO, and what Ukraine needs to stop Russia’s imperialism.

The international press, once gripped by Russia’s unprovoked invasion, is moving on from this war coverage. And Americans are beginning to grow weary of the financial cost and the seeming absence of strategic objective on the part of NATO. Zelenska’s delivery demands the attention of the Free World.

She brought the human side of this war. Standing in the Capitol, she listed the names and descriptions of the little girls she personally knew who were targeted by Russia’s weapons. “But how can I talk about [peaceful affairs] when an unprovoked invasive terrorist war is being waged against my country? Russia is destroying our people,” Zelenska said.

She emphasized how thankful she was for Americans’ support for the war so far, and she asked for more weapons, specifically defenses. She said, “I’m asking for something now I would never want to ask,” Zelenska said. “I’m asking for weapons, weapons that would not be used to wage a war on somebody else’s land, but to protect one’s home and the right to wake up alive in that home.”

Offensive weapons are still necessary to push Russia out of Ukraine and end this war. Make no mistake, Ukraine still needs more and different kinds of US-made weapons The HIMARS missile system is showing off how more capable systems really can stop the Russian advance. Gen. Valery Zaluzhny, commander in chief of the Ukrainian Armed Forces, has praised the systems. According to him they have enabled Ukrainian forces to hit Russian ammunition and fuel storage depots.

But to decrease the carnage, to limit the damage to Ukrainian infrastructure, they need more defensive systems to intercept missiles. “I am asking for air defense systems in order for rockets not to kill children in their strollers . . . and kill entire families.”

Zelenska noted that since the beginning of the Russia’s war of aggression, Vladimir Putin has launched over 3,000 different cruise missiles against Ukraine.

One last point about the first lady’s dignified plea: It should dispel the myth that the fact that Russia was unable to sack Kyiv in a day proves that “Europe can handle Europe” if the United States simply backs out. US-made systems are the vast majority of the weapons Ukraine has and needs to defend itself and push Russia out. And it is American-led training of Ukrainian forces that have helped them so impressively perform so well in defense of their family and their nation. If the US helped Ukraine fight even more like NATO would, Ukraine might even be successful in pushing Russia out.

“I know that you, ladies and gentlemen, will be leaving for the traditional congressional recess in a week,” Zelenska said. “And all of you will be able to return to your offices in the fall, and probably all of you have already your calendar and schedule for September. This is normal. And it is precisely this normalcy that we Ukrainians are deprived of now.”

There will be no normal until Russia’s war ends. May Zelenska’s words not be in vain.