The first six months of 2020 presented Americans with a baffling and dangerous public health crisis as well as varied and evolving policy responses from governments at the local, state, and federal level — all of which directly affected their lives in real time.

Research into COVID-19 has been growing exponentially. A mid-May article in Science put the number of published papers at 23,000 and doubling every 20 days. Yet much remains unknown about the virus, and we still have no certain knowledge of how the crisis is going to end. Nevertheless, self-confident public recriminations over policy decisions are as bitter as one might expect in a hyper-partisan political environment during a presidential election year. It’s prudent to keep in mind that the criticisms come without benefit of dispassionate hindsight and, indeed, in the middle of ongoing uncertainty.

The Democracy Fund + UCLA Nationscape survey provides important insight into how Americans have viewed the crisis as it has unfolded. The survey has solicited views on the coronavirus pandemic, interviewing approximately 6,300 people each week beginning March 18, 2020. It reveals views of the crisis that differ across the ideological spectrum, but with commonalities of behavior that resist the ideological divergence.

In some respects the results are akin to a dog that isn’t barking: some of the questions in the survey ask people about their own behavior, and the results vary only modestly across demographic groups including sex, age, and income, as well as party affiliation, 2016 presidential vote, and ideology. For example, the July 9–15 wave asked respondents whether in the past week they had “worn a mask when going out in public.” Overall, 92 percent said yes and 8 percent no, with small differences across demographic groups. 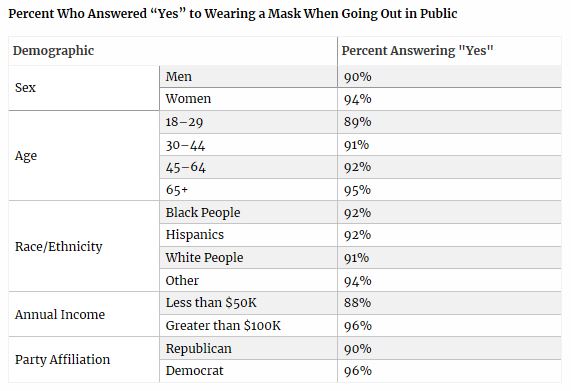 Modest differences emerge in political categories, but in the context of a high degree of consensus: 90 percent of Republicans versus 96 percent of Democrats said they had worn a mask.

A behavioral question with a more uneven result asked respondents whether they had left their house in the past week “for non-essential goods or services.” Here, the overall split was 54 percent yes to 46 percent no. Men were somewhat more likely to say they had left home, at 58 percent versus 51 percent of women. Young people were more likely than older people to say they had stepped out for non-essentials, with 55% of 18-29 years olds reporting that they had done so, compared to 46% of people over 65 years old. On the question of going out in public, Democrats are emerging as slightly more cautious than Republicans: only 47 percent of Democrats said they left the house in the past week for non-essentials, compared to 64 percent of Republicans.

One pandemic “dog” has been barking consistently through all weekly waves of the Nationscape survey: the considerable difference in level of concern over the virus based on ideological point of view. The survey asks: “How concerned are you about coronavirus here in the United States?” It gives respondents a choice between very, somewhat, not very, and not at all concerned. Those who identify as “very liberal” are much more likely to say they are very concerned than those who identify as “conservative” or “very conservative.” In the July 9–15 wave, 85 percent of the “very liberal” are very concerned — compared to 47 and 49 percent respectively in the two conservative categories.

In the unweighted Nationscape sample of 6,319 individuals who answered this question, those who identify as “very liberal” make up a little over 10.5 percent of all respondents, about the same percentage as those identifying as “very conservative.” People calling themselves “liberal” account for another 16.5 percent, “moderate” a little over 33 percent, and “conservative” a little over 18.5 percent.

Of those identifying as “liberal,” 71 percent are very concerned, with moderates at 61 percent. So apart from the slightly greater propensity toward being very concerned among the “very conservative” compared to the “conservative,” we have a fairly straightforward ideological progression: the farther left you lean, the more likely you are to be very worried about the coronavirus. 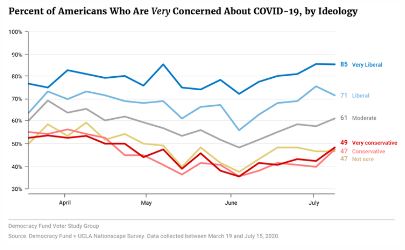 Between 8 and 11 percent of all respondents each week say they are “not sure” where they fall ideologically. In the July 9–15 wave of the survey, just over 10 percent were “not sure.” Forty-seven percent of these “not sure” respondents were very concerned about the coronavirus — the same as the proportion of those identifying as “conservative” who expressed the same level of concern. In previous waves, however, the percentage of this “not sure” group saying they are very concerned about the coronavirus has fallen between the percentage of those identifying as “moderate” and those identifying as “conservative” who said the same. In other words, if level of concern is a predictor of political ideology, this group generally lands slightly to the right of “moderate.”

By contrast, those identifying as “conservative” have experienced changing levels of concern. For the first five weeks of the survey question, the very concerned in this group landed in the 53–55 percent range. At the end of April, conservatives dipped to 45 percent and continued to fall to a low of 35 percent in the June 4–10 survey, after which they began to rise again, reaching 47 percent in the July 9–15 wave. Also notably, by the time of the survey wave that began May 7, one in five of those identifying as “conservative” said they were not very concerned or not at all concerned. At no time have those two responses combined accounted for more than 8 percent of those calling themselves “very liberal” or “liberal.”

The Nationscape survey has not asked why people are concerned about the coronavirus to the extent that they are. It seems likely that most people’s first thoughts go to their own health and that of their families and friends, considering the risk of contracting COVID-19 and how sick one might get. But many Americans are also concerned about second-order effects; for example, the economic downturn in general or their personal finances, or added stress in areas such as child or elder care. For example, FiveThirtyEight’s tracking shows that every day starting March 22, at least 50 percent of Americans have said they are very concerned about the effect of coronavirus on the economy, with just under an additional third saying they are somewhat concerned. The level of concern about the economy is in fact considerably higher than the concern that “they, someone in their family, or someone they know will become infected with coronavirus”: FiveThirtyEight shows 36 percent very concerned, 33 percent somewhat, 17 not very, and 11 percent not at all concerned.

It therefore seems very likely that disaggregating health from other concerns among the very concerned and somewhat concerned would reveal an even more pronounced ideological dimension to the response.

On June 20, Israeli Prime Minister Naftali Bennett and Foreign Minister Yair Lapid announced their intention to dissolve the Knesset, teeing up the fi...