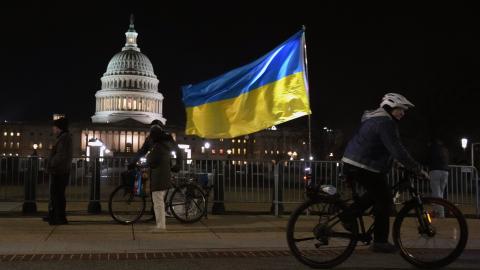 Caption
Pro-Ukraine demonstrators outside the US Capitol as President of Ukraine Volodomyr Zelenskyy addresses a joint meeting of Congress on December 21, 2022, in Washington, DC. (Drew Angerer/Getty Images)

Russia's large-scale invasion of Ukraine in February 2022 fundamentally altered the geopolitical and security environment in the transatlantic region in a way not seen since World War II. The invasion also served as a reminder of why Europe is important to America’s national interests.

Some of America's oldest (France), closest (United Kingdom), and most reliable allies (central and eastern Europeans) are in Europe. The North American and European continents are also closely linked economically. These two landmasses account for approximately 45 percent of the global economy. Last year, the US and Europe were each other’s largest export markets. Forty-eight of the 50 states—including the Pacific Ocean states of California, Oregon, Washington, Alaska, and Hawaii—exported more to Europe than to China. Year after year, the US and Europe are also each other’s top source of foreign direct investment. Europe’s security and stability, which Russia now threatens, bring untold benefits to the US economy and, by extension, the American worker.

As the 118th Congress considers issues relating to US foreign policy, these are the top five issues in Europe in 2023:

1. Ukraine’s Victory Is the Top Priority
The economic and military assistance for Ukraine that the US Congress has authorized since February 2022 has been the deciding factor in Ukraine’s national defense. Considering the blow Ukraine has delivered to Russia’s conventional military, America’s second-largest adversary, this assistance has been a good value for the American taxpayer. Ukrainians are not asking for, nor do they want, US troops to help them fight Russia. All they ask for is the equipment, weapons, munitions, and financial resources required to give them a fighting chance. It is in America’s interest that Ukraine wins the war, and that Russia is decisively defeated. The US Congress should continue to approve economic and military aid to assist Ukraine’s national defense.

2. NATO Summit in Lithuania (July)
This summit will come at a crucial time for the transatlantic alliance. It will be NATO’s first summit since the alliance published its Strategic Concept last year and the second summit since Russia’s large-scale invasion of Ukraine. Hopefully, it will also be an enlargement summit with Sweden and Finland officially joining NATO. The summit should prioritize continuing support for Ukraine, maintaining the alliance’s defensive posture in eastern Europe, and ensuring that members increase defense spending in line with pledges made in 2022. The US Congress should help lay the groundwork now for a productive and successful summit later this year.

3. Three Seas Initiative (3SI) Summit in Romania
Poland launched the Three Seas Initiative in 2016 to facilitate the development of energy and infrastructure ties among 12 nations in eastern, central, and southern Europe. The initiative aims to strengthen trade, infrastructure, energy, and political cooperation among countries bordering the Adriatic, Baltic, and Black Seas. As a vestige of the Cold War, most infrastructure in the region runs east to west, stymying greater regional interconnectedness. Developing north-south interconnections and pipelines would spur economic growth, prosperity, and security. Not only can the 3SI improve Europe’s long-term energy security, but the initiative can also play a role in Ukraine’s post-war reconstruction by better connecting it to the rest of Europe. A more integrated eastern and southern European economy holds better prospects for US exporters and investors.

4. Energy Security in Europe
Decades of cheap Russian oil and gas fueled Europe’s economic development and growth. Now European policymakers face the difficult decision of how to reduce their dependency on Russian energy. Due to policymakers’ prudent steps in 2022, Europe will likely get through the current winter without any major issues. However, next winter is a concern. If steps are taken now, Europe can get on the path toward energy security for the first time in decades. Every barrel of oil and cubic meter of natural gas that the Europeans obtain from somewhere other than Russia or Iran will make the continent safer. Washington should work with Europe to develop a new energy strategy, and Congress should pressure the White House to increase US domestic oil and gas production for export.

5. Going on Offense between the Black Sea and the Caspian Sea
Russia is consumed almost solely by events in Ukraine and the impact of economic sanctions. The US should take advantage of Russia’s unbalanced geopolitical equilibrium and engage more with countries in the Black Sea and Caspian Sea regions. This area is becoming increasingly important for energy, the movement of goods in the region, and the global economy. The Organization for Democracy and Economic Development–GUAM is a regional bloc that encourages cooperation between Georgia, Ukraine, Azerbaijan, and Moldova. Congress should host a special inter-parliamentary gathering with legislators from GUAM parliaments to build relations and explore areas of cooperation. The last US-GUAM meeting at the foreign ministers’ level took place in 2017. Secretary of State Antony Blinken should immediately request to host a US-GUAM summit to boost cooperation between the US and GUAM countries.

Ten Myths about US Aid to Ukraine

Prepare Ukraine for Victory in a Long War

NATO Needs a New Strategy for the Baltic Sea